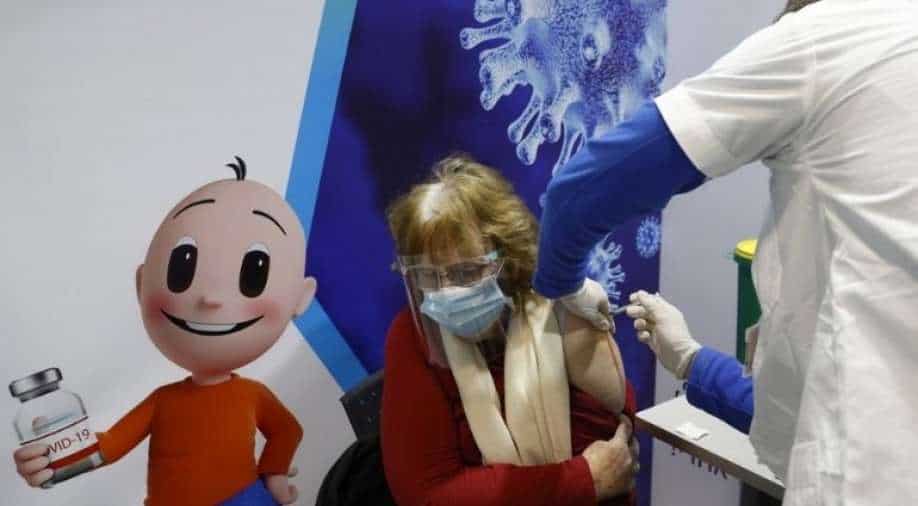 An Israeli health worker administers a dose of the Pfizer-BioNtech Covid-19 vaccine to a man at Clalit Health Services, in the hallways of the Netanya stadium, on January 20, 2021 in the Israeli coastal city of Netanya Photograph:( AFP )

Israel's health ministry tested 189,000 people after they vaccinated by Pfizer's vaccine and 6.6 per cent of the people still tested positive for COVID-19

More than 12,400 people have tested positive for coronavirus in Israel after getting inoculated by the Pfizer/BioNtech vaccine, including 69 people who had taken their second jab.

Israel's health ministry tested 189,000 people after they vaccinated by Pfizer's vaccine and 6.6 per cent of the people still tested positive for COVID-19.

Earlier, Nachman Ash, national coordinator on the pandemic had said that Pfizer's vaccine was "less effective than we had thought".

Israel launched a vaccination drive on December 19 with a focus on the elderly, those with risky medical conditions and some emergency workers. More than a quarter of its citizens have now received the Pfizer Inc. vaccine, health officials say.

About a quarter of Israelis have received their first vaccine shot and 3.5 per cent already got their second dose.

Since the rollout of vaccinations one month ago, the Jewish state had inoculated more than 2.2 million of its nine million inhabitants, Health Minister Yuli Edelstein said Tuesday.

Still, the country is in its third lockdown with infection rates remaining high. More than half a million cases have been reported and 4,005 people have died in Israel since the pandemic began.

The rise in infections, despite the lockdown and vaccinations, has been attributed to virus mutations and disregard by some people of restrictions on assembly.

In return for rapid delivery of the Pfizer-BioNTech vaccine, Israel has committed to sharing with the US-German manufacturer its data on the effects of the mass immunisation.