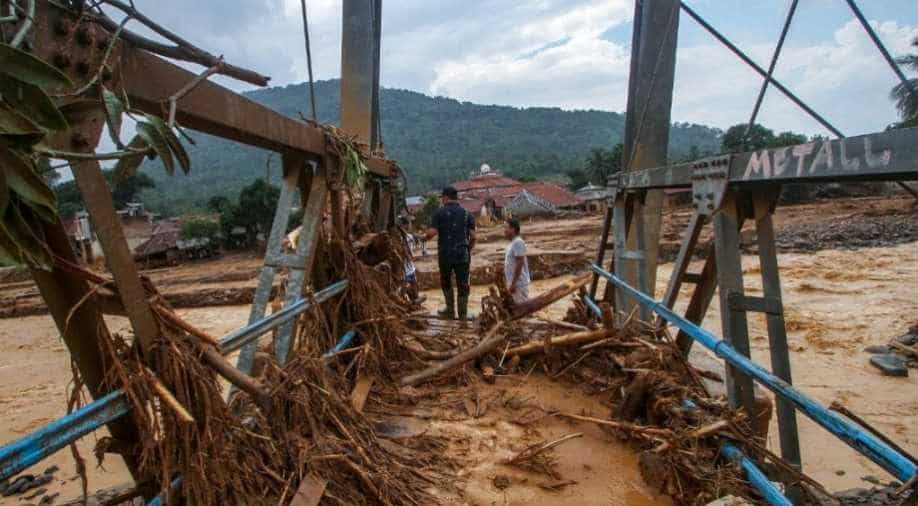 Villagers check the condition of a bridge destroyed by a flood at the Banjar Irigasi village in Lebak, Banten province. Photograph:(AFP)
Follow Us

Tens of thousands fled to temporary shelters across the capital region with scores of houses damaged in the deadliest flooding in years, after torrential rains on New Year's Eve.

Tens of thousands fled to temporary shelters across the capital region -- home to some 30 million -- with scores of houses damaged in the deadliest flooding in years, after torrential rains on New Year's Eve.

Images showed waterlogged homes and cars covered in muddy floodwaters, while some people took to paddling in small rubber lifeboats or tyre inner-tubes to get around.

In Bekasi, on the outskirts of the city, receding waters revealed swampy streets littered with debris and crushed cars lying on top of each other -- with waterline marks reaching as high as buildings' second floors.

"I saw the water coming and it just kept getting higher and higher," said Deddy Supriadi, after a local river overflowed on the first day of 2020.

Rescuers used inflatable boats to evacuate residents trapped in their homes, including children and seniors.

TV images showed the dramatic rescue of a baby saved by disaster personnel who waded through chin-deep water to the family's home and carried the infant away to safety in a small plastic tub.

"In some places, the rescue operation was quite challenging and difficult. The water was deep with a strong current. Some alleyways were so narrow that it was hard for our inflatable boats to pass through," he added.

Across the city, kids took the opportunity to swim in the floodwaters while some people grabbed fishing rods.

"I saw people were fishing here so I followed them," said 28-year-old Agung Rosiadi.

"There were lots of fish before but I don't know why they're all gone now," he added.

At least 26 people died in greater Jakarta, while three more were killed by flash floods in neighbouring Lebak regency in the south of Java island, according to the local disaster agency.

Police in Lebak said Thursday they were searching for as many as eight people who could still be missing.

Around Jakarta, an eight-year-old boy killed in a landslide and an 82-year-old pensioner were among the confirmed victims.

Others died from drowning or hypothermia, while one 16-year-old boy was electrocuted by a power line.

"The floods hit without warning," Munarsih, who goes by one name, said from her waterlogged neighbourhood in Jakarta's western outskirts where dozens of families fled to safety.

"The water came very fast and it rose quickly. We couldn't manage to get our stuff out, including my car," she added.

Stories about animal rescues went viral online, including a dog chained to a fence that was plucked from certain death, while a drenched rat was filmed taking refuge on a floating plastic sandal.

On Wednesday, electricity was switched off in many Jakarta districts to prevent more electrocutions, with some train lines and one airport also shut. By Thursday, most service had returned to normal.

The disaster marked Jakarta's worst flooding since 2013 when dozens were killed after the city was inundated by monsoon rains.

Jakarta is regularly hit by floods during Indonesia's rainy season, which started in late November.

Authorities said Thursday that some 31,000 people had been evacuated, but that figure did not include residents in Jakarta's satellite cities.