In defeat for Trump, US judge blocks transgender military ban 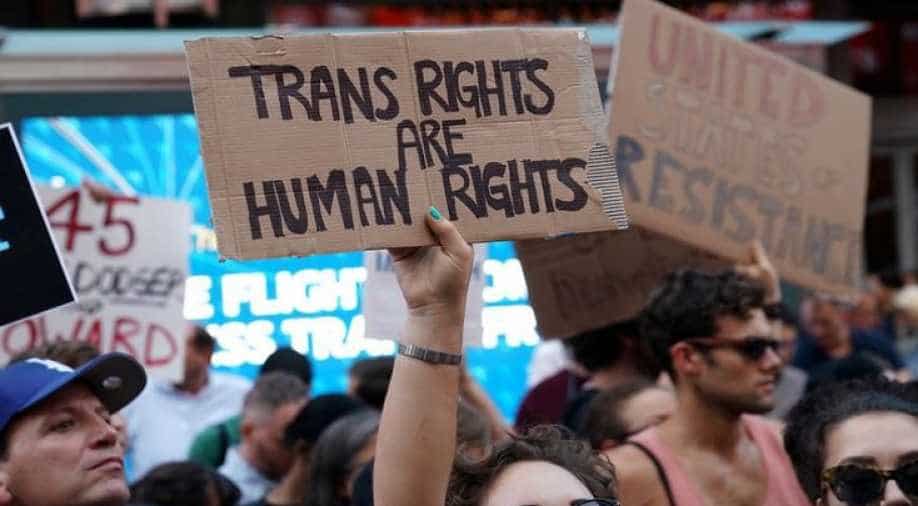 "This is a hugely important decision and confirms that transgender people can and should be able to serve in the military if they are qualified to do so," said the plaintiffs' lead attorney, Jennifer Levi.

A federal judge in Washington on Monday blocked President Donald Trump from banning transgender people from serving in the US military, handing a victory to transgender service members who accused the president of violating their constitutional rights.

Trump announced in July that he would ban transgender people from the military in a move that would reverse Democratic former President Barack Obama's policy of accepting them and halt years of efforts to eliminate barriers to military service based on sexual orientation or gender identity.

The transgender service members sued in August to try to block the ban, which had not yet gone into effect, and US District Judge Colleen Kollar-Kotelly granted them an injunction halting enforcement of it until their case is resolved.

The service members asserted that Trump's policy violated their rights to due process and equal protection under the law under the US Constitution. Kollar-Kotelly said the plaintiffs were likely to succeed in their claim that the ban was unconstitutional because the administration's reasons for it "do not appear to be supported by any facts."

After his policy announcement on Twitter, Trump signed a memorandum in August that directed the military not to accept transgender people as recruits and halted the use of government funds for sex-reassignment surgeries for active-duty personnel unless the process was already underway.

The memo called on Defense Secretary James Mattis to submit a plan to Trump by Feb. 21 on how to implement the changes, and the Pentagon has created a panel of senior officials for that purpose. In the meantime, the current policy of allowing transgender people to serve remains in force.

Mattis in June already had delayed allowing transgender recruits to join the US armed forces on July 1 as previously scheduled.

The judge tossed out the suit's challenge to the sex-reassignment surgery directive, saying none of the plaintiffs had shown they would be impacted by that prohibition.

"This is a hugely important decision and confirms that transgender people can and should be able to serve in the military if they are qualified to do so," said the plaintiffs' lead attorney, Jennifer Levi.

"The court saw through the smoke screens that the government tried to throw up to hide what is actually going on here, which is straight-on bias and prejudice against transgender people," added Levi, director of the transgender rights project for the anti-discrimination group GLBTQ Legal Advocates & Defenders.

The Justice Department said it was disappointed in the ruling and evaluating its next steps. Spokeswoman Lauren Ehrsam said the suit was premature because the "Defense Department is actively reviewing such service requirements, as the president ordered, and because none of the plaintiffs have established that they will be impacted by current policies on military service."

The judge's action marked the latest legal setback suffered by Trump on policies he has pursued as president. Courts also have blocked Trump's latest version of a travel ban on people from several Muslim-majority countries, and dealt him setbacks on policies on so-called sanctuary cities and environmental rules.

The service members who sued Trump, Secretary of Defense James Mattis and military leaders in August had been serving openly as transgender people in the US Army, Air Force and Coast Guard. They said Trump's ban discriminated against them based on their sex and transgender status.

They also said they relied on the 2016 policy put in place by Obama to reveal they are transgender and called Trump's reversal unfair, arbitrary and a violation of their privacy rights.

The Trump administration argued that transgender people might harm military unit cohesion and that they suffer medical conditions that could limit their ability to perform duties or deploy.

The judge said the military previously commissioned a study that debunked concerns about unit cohesion, military readiness, or healthcare costs related to transgender troops. That report estimated there were 2,450 active-duty service members and 1,510 in the military reserves.

"In short, the military concerns purportedly underlying the president's decision had been studied and rejected by the military itself," Kollar-Kotelly wrote.

Other suits also have been filed against Trump's ban.