'Hunger crimes' on the rise in crisis-hit Lebanon 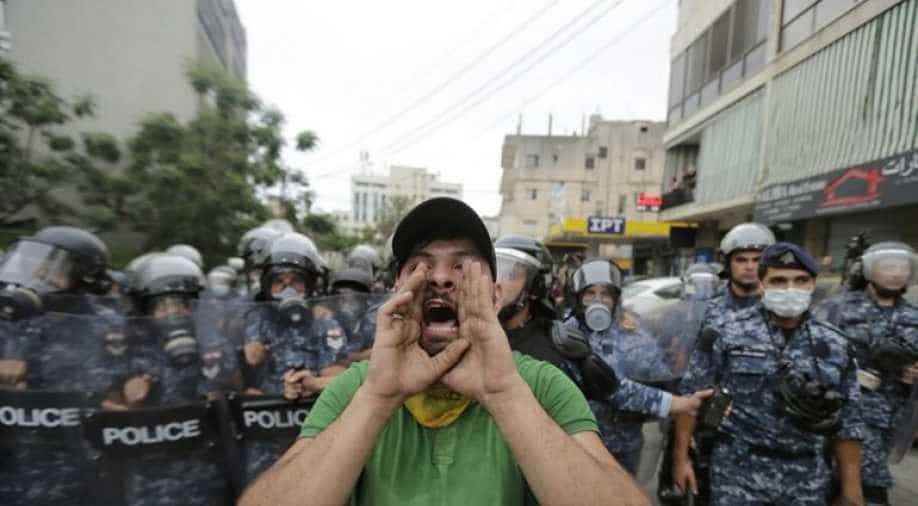 A protester wearing a scarf of the Shiite movement Hezbollah chants slogans while being flanked by Lebanese police during an anti-US demonstration near the United States' Embassy headquarters in Awkar, northeast of the capital Beirut on July 10, 2020. Photograph:( AFP )

Zakaria al-Omar was walking through Beirut when a stranger robbed him at knifepoint, a desperate crime of a kind that has become increasingly common in crisis-torn Lebanon.

The small Mediterranean country is mired in an economic crisis marked by a steep currency fall and runaway inflation that have plunged nearly half of the population into poverty.

Omar, a 37-year-old graphic designer, recalled the terrifying and tragic encounter that started when a man in his 40s crept up behind him as he walked alone at night through Beirut's Hamra commercial district.

"He told me that he didn't want to hurt me. He asked me to give him money or take him to a grocery store to buy some food," Omar recounted. "He said his children back home were crying from hunger."

The robber grabbed the money and darted toward his motorcycle, then stopped dead in his tracks and returned, explaining that he had lost his job and could no longer pay the rent.

"He started crying and apologised to me," Omar told AFP. "He told me that he was not a thief but that he was hungry and so were his children."

Omar said he refused to take back the cash.

"I told him that I forgave him, and then he went away," Omar said. "I was scared but I also felt sad for that man breaking down in front of me."

The ISF recorded 863 thefts and robberies in the first half of this year, up from 650 for all of 2019, according to a document seen by AFP.

Apologetic robbers
A security official who asked not to be named told AFP that broader crime rates during the first half of 2020 reached a six-year peak, especially murders and robberies.

The rise appeared to be driven by the deepening economic crisis, said the official, who was not authorised to speak on the issue.

Police were noticing a "new kind of theft that involves mainly baby milk, food, and medicine", the source said.

In another trend that evoked Omar's encounter, the source added, "more than one victim has said the perpetrators apologised while robbing them".

Tens of thousands of Lebanese have lost their jobs or part of their salaries, while a crippling dollar shortage has sparked rapid inflation.

The Lebanese pound, though officially pegged to the dollar at 1,507, reached a peak of more than 9,000 to the greenback on the black market in early July.

With Lebanon heavily reliant on imports, the price of medicine, baby milk and food has reached record highs.

'Deteriorating conditions'
In a video widely shared on social media this month, three men were filmed walking away from a Beirut restaurant carrying a large and heavy-looking safe.

Walid Ataya, the restaurant owner, said: "They took money from the cash register, even the spare change. Then they scoured the place until they spotted the safe, which they couldn't open."

He did not reveal exactly how much was lost but said the robbers stole the proceeds from "two years' worth of work".

Ataya, who owns a chain of upscale restaurants in Beirut, said the safe contained cash he did not want to deposit in a bank, now a common concern.

Since the autumn, Lebanese banks have gradually forbidden depositors from withdrawing their dollar savings or transferring them abroad, prompting many to stash cash in their offices or at home.

Apart from money, increasingly more cars are being stolen.

The ISF has recorded 303 vehicle thefts so far this year -- more than the 273 in the second half of last year.