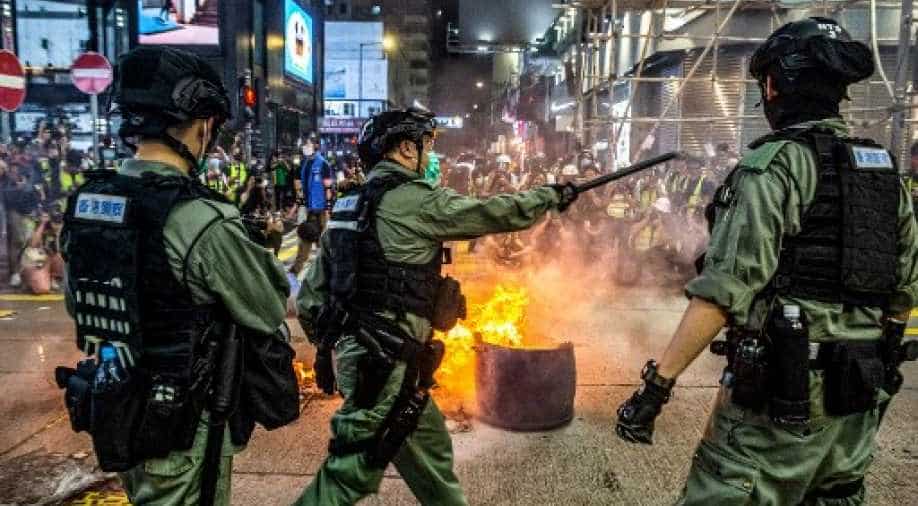 Police stand guard on a road to deter pro-democracy protesters from blocking roads in the Mong Kok district of Hong Kong Photograph:( AFP )

The Chinese legislature is expected to take up the controversial security law on Thursday, a move which Hong Kong citizens say curbs freedom as it aims to ban secession, subversion and foreign interference

Amid the row over China's proposed security law to be imposed on Hong Kong, US Secretary of State Mike Pompeo told the US Congress that "no reasonable person can assert today that Hong Kong maintains a high degree of autonomy from China, given facts on the ground."

"I certified to Congress today that Hong Kong does not continue to warrant treatment under United States laws in the same manner as US laws were applied to Hong Kong before July 1997," Pompeo said in a statement.

Today, I reported to Congress that Hong Kong is no longer autonomous from China, given facts on the ground. The United States stands with the people of Hong Kong.

Under US law Hong Kong would lose the trading advantages, including lower tariffs. According to a law passed last year, the US administration must certify that Hong Kong still enjoys freedom promised by China when it negotiated with Britain to take back the colony in 1997.

Under the "one country, two systems" model agreed upon with Britain China had allowed Hong Kong certain liberties until 2047 that are normally denied to those on the mainland.

"While the United States once hoped that free and prosperous Hong Kong would provide a model for authoritarian China, it is now clear that China is modeling Hong Kong after itself," Pompeo said.

The Chinese legislature is expected to take up the controversial security law on Thursday, a move which Hong Kong citizens say curbs freedom as it aims to ban secession, subversion and foreign interference.

"The United States stands with the people of Hong Kong as they struggle against the CCP's increasing denial of the autonomy that they were promised," the US secertary of state asserted.

The US move comes amid protests in Hong Kong as police fired pepper ball rounds at protesters in the city's commercial district ahead of a debate in the legislature on Wednesday.