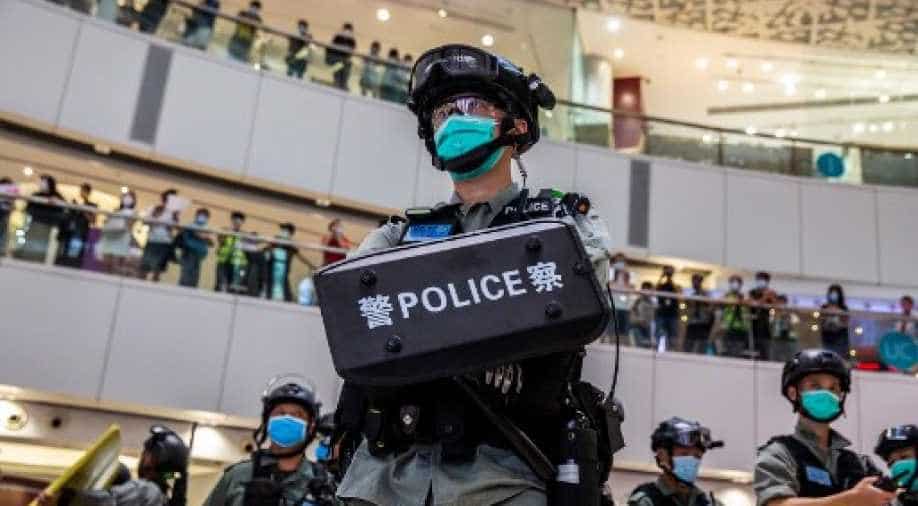 The elections were to have taken place Sunday but Chief Executive Carrie Lam on July 31 postponed them for one year. (File image)) Photograph:( AFP )

Citing China's decision to enact a new national security law for Hong Kong, Trump signed an executive order that he said would end the preferential economic treatment for the city

China's new security law has sent a chill through Hong Kong's schools and universities with many teachers fearful the city's reputation for academic freedom and excellence is now at risk.

Just a week after the sweeping legislation was imposed on the territory, staff at some institutions have already been warned by their administrators to be careful how they teach.

"Remain neutral in your teaching and be mindful of the language you use," read one email to staff of HKU SPACE, a college attached to the prestigious University of Hong Kong (HKU).

"Any behaviour in eliciting further discussion on sensitive issues MUST be avoided," the email from the program director of the humanities and law faculty said.

It ended with a warning of "zero-tolerance against politics or personal political views brought into classrooms".

One recipient told AFP the instruction amounted to self censorship.

"This may be partly out of genuine concern for staff, but it strangles free speech without the government having to lift a finger," said a lecturer who asked not to be identified.

In a statement, HKU said the email was "private correspondence" and not official policy, but it added that classrooms must be "a politically neutral space where participants focus on academic learning".

'Campuses infiltrated'
Hong Kong has some of Asia's best schools and universities and -- compared with China's party-controlled education system -- boasts an open campus culture of critical analysis and tackling subjects that are unapproachable on the mainland.

But all that could be changing.

China's leaders have made it clear they view Hong Kong's education system as one of the driving factors behind last year's huge and often violent pro-democracy protests.

They have ordered the city to instil more "patriotic" education and ensure the new security laws are obeyed.

Hong Kong's education chief has since banned students from singing a popular protest anthem, while public and school libraries are pulling books that might breach the new rules.

At a speech to an education summit last weekend, city leader Carrie Lam said schools and universities had become "politicised".

"Anti-central government and anti-government forces are trying to infiltrate our campuses," she said, adding that student resentment was also fuelled by "negative media reports about our country".

Pro-Beijing politicians have even proposed installing cameras in classrooms to keep a tab on teachers.

"Academic freedom... can't override laws and give students an excuse to do whatever they want," Tommy Cheung, a cabinet member who also sits on the council of the Chinese University of Hong Kong, told AFP.

Asked about the idea of cameras in classrooms he replied: "If you are not saying anything that you would not be afraid of being heard, then why would you fear being recorded?"

China's definition of national security extends beyond the standard concepts of threats such as terrorism and military attacks, and is often used to crush domestic criticism on the mainland.

The Hong Kong version contains many ambiguously worded provisions, including against "inducing hatred" of the government.

Harder to hire
As a result, some teachers say they already fear overstepping invisible red lines -- even mistakenly.

"Should we uphold the critical thinking approach or should we toe the official line for better safety," said Benson Wong, a lecturer at the Education University of Hong Kong.

A history teacher at an international school said he already avoided asking students to write essays about controversial topics, preferring conversations instead.

"The vagaries of the national security law are designed to chill and quell discussion because one cannot know when they have stepped over the line," he told AFP.

"A true education in history and social studies is not about remembering a story or being able to regurgitate a national myth."

"People are getting more hesitant to come," he told AFP, noting that it had become all but impossible in recent years to arrange conferences in Hong Kong on taboo topics such as Taiwan, Xinjiang and Tibet.

Others said they would consider leaving if the situation deteriorates further.

"I haven't yet determined where my line is," one lecturer at CUHK told AFP, asking to remain anonymous.

"I suspect I'll know it when it's crossed, and at that moment I hope I'll have the courage of my convictions."