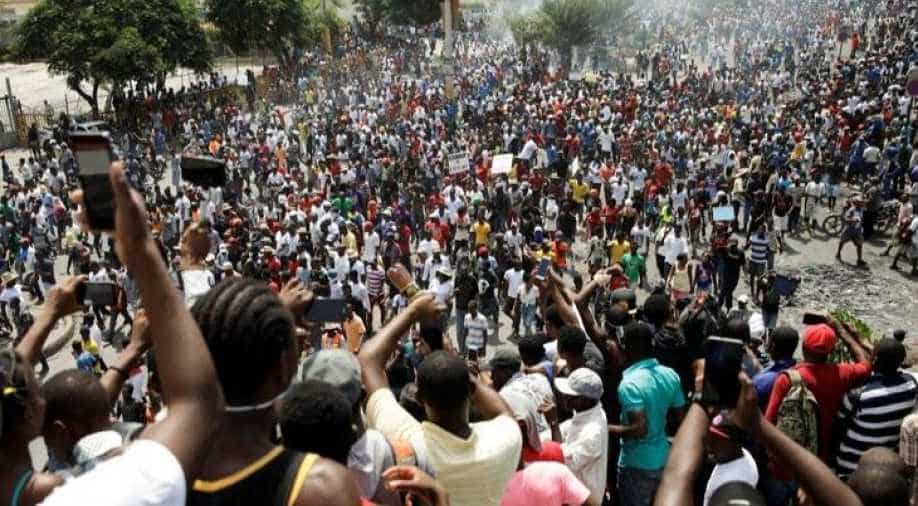 File Photo of the protest in Haiti. Photograph:( Reuters )

At one point, protesters atop a truck blasting music used microphones to beseech others not to throw rocks at police and businesses.

Haitian opposition leaders led a large and mostly peaceful march in the capital on Friday as they called for the resignation of President Jovenel Moise, whom they blame for a deep economic and political crisis in the troubled Caribbean country.

Although some violence flared between protesters and police, the mood overall was calmer than in recent rallies, as the opposition appeared to heed calls from the United Nations and Canada to stage peaceful demonstrations.

At one point, protesters atop a truck blasting music used microphones to beseech others not to throw rocks at police and businesses.

Earlier in the day, clashes had broken out as helmeted police with shields used trucks, water cannons and tear gas to prevent protesters from marching on the headquarters of the U.N. peacekeeping and justice force near the Port-au-Prince airport.

Some protesters set tires aflame and hurled rocks, bottles and Molotov cocktails in the streets.

Many opposition leaders and disgruntled Haitians have called for Moise's ouster, blaming him for a failing to address problems widespread food and fuel shortages, a weakening currency, double-digit inflation and graft accusations made against public officials.

Andre Michel, a political opposition leader, told Reuters this week the demonstration was meant to send a "very strong message" that Moise needs to step down.

In a letter addressed to the United Nations Secretary-General Antonio Guterres dated Wednesday, opposition leaders urged the organization to disassociate from Moise, whose government they said helped commit a "massacre" in the poor La Saline neighbourhood in the capital.

"The country is on the brink of an unprecedented humanitarian catastrophe," the letter stated, noting that shuttered businesses, banks, and schools have made Haiti "totally dysfunctional" and more than 100 demonstrators have been injured.

The country is still grappling with the fallout from past crises, including a 2010 earthquake that killed some 300,000 people.

Protests in the most impoverished country in the Americas last week were among the largest and most violent in months. During some of the unrest, specialized units of the U.N.-backed Haitian National Police were ransacked and looted and two police vehicles set on fire.

Anti-government demonstrations turned especially violent in February when the United Nations said 41 people were killed and another 100 injured. Police say at least five people have been killed in clashes in the past few weeks, but Moise has given no indication he intends to resign.

Canadian Foreign Minister Chrystia Freeland this week condemned all violence in Haiti, and the U.N. reiterated earlier calls for calm.