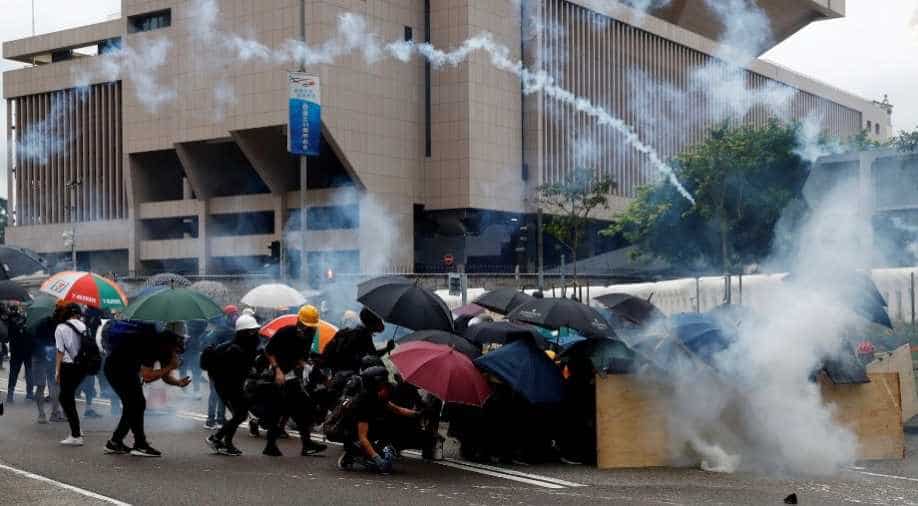 Activists said that the residents of Hong Kong are denied fundamental rights and are living in fear of being targeted.

Activists from Hong Kong and Xinjiang shared a platform to raise their voice against human rights violations by China on the sidelines of the 42nd session of the UN Human Rights Council in Geneva on Friday.

Beatrice Li and Andy Li, the two activists from Hong Kong, brought used tear gas canisters, solid rubber batons, smoke grenade, rubber rocket and other arms used by the Hong Kong Police against the protesters to the side event to establish their claim.

They said that the residents of Hong Kong are denied fundamental rights and are living in fear of being targeted.

"Hong Kong police has physically and verbally assaulted the journalists and other citizens", said Beatrice Li, an activist from Hong Kong adding that the use of lethal and chemical weapons is causing health issues for residents.

Meanwhile, Andy Li, Human Rights activist from Hong Kong said, "If the Chinese government has already committed atrocities in other lands which they do not have legal control of, we cannot imagine what would have happened if they are allowed full legal control over the Hong Kong land."

"The people of Hong Kong have realised that the government of Hong Kong is accountable to China, not to its own people," he added.

Since June, millions of Hong Kong people began to mobilise against an extradition bill that would allow dissidents to be sent to face trial in China, whose criminal justice system is rife with human rights abuses.

Instead of listening to the demands of the people, the Hong Kong government has engaged in a coordinated suppression of Hong Kongers rights and freedoms, including those of assembly, expression and the press.

According to data, 1,453 people have been arrested from June 09 until September 16.

Dolkun Isa of World Uyghur Congress, said people in Xinjiang have been suffering China's brutalities for the past many decades.

He also showed sympathy for Hong Kong people saying that China is breaking the democratic values of Hong Kong by interfering in its internal affairs."Hong Kong people don't want to be Xinjiang", he added.