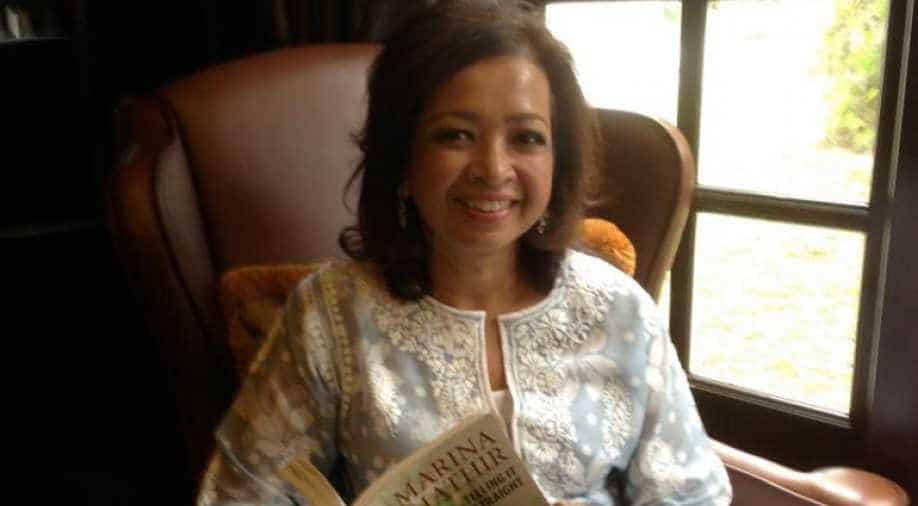 She is the daughter of Mahathir Mohammed, the longest-serving former Prime Minister of Malaysia and also at the forefront of activism against what she calls 'Arab colonialism'. Photograph:( Facebook )

Saudi Arabia’s King Salman and a 500-member plus entourage visited Malaysia and are now in Indonesia. The Saudis will holiday there and then travel onwards to Brunei, the Maldives, Japan and China. Saudi Arabia is ostensibly seeking and offering investment, among others a Joint Venture with South East Asian oil companies. But is he also there as a public relations act to fortify Wahabi Islam, the rapidly spreading and rigid form as practised in Saudi Arabia.

WION’s Senior International Correspondent Padma Rao Sundarji spoke to Malaysian activist Marina Mahathir. She is the daughter of Mahathir Mohammed, the longest-serving former Prime Minister of Malaysia and also at the forefront of activism against what she calls “Arab colonialism”.

PRS: Ms Mahathir, Saudi Arabia’s King Salman is currently visiting your region with a huge entourage and will remain in Asia for an entire month. You have often warned of ‘’Arab Colonialism” in Malaysia. Does that warning extend to the entire South East Asian region and if so, are your own Islamic scholars doing anything about it?

Mahathir: They claim to be. But it’s not very effective because they are giving out mixed messages. On the one hand, they talk about how people should not go off to join IS. They are very concerned about potential recruits for IS. But at the same time, they are also extremely conservative and not very tolerant of anything that is not part of the Sunni sect of Islam. Malaysian Muslims have been increasingly taking on Arab forms of dress, even Arab forms of speaking. Most of us do not speak Arabic but to show their Islamic credentials, some people will start a speech in Arabic without translating it, for instance. Additionally, there is almost a rejection of our own local culture. There is a lot of Malay culture that has been banned or downgraded or neglected. I feel very much that we are losing our identity and becoming more and more alien to our culture. And I see that also in other parts of Muslim parts of South Asia but I think it is more obvious here because we are a Muslim majority country but much smaller.

PRS: Does this “Arab colonialism” target women in particular? Have there been sudden, new diktats on how to dress, how to and what to speak?

Mahathir: I think the most obvious is in the way that some women dress. Suddenly, we see a lot of women favouring the long caftan-like outfit, rather than our traditional dress. Whether out of fashion sense or comfort, it’s still quite worrying to see so many women doing so and neglecting our own, traditional outfits. I’ve started seeing quite a few niqabs, the face-covering head-dress. It is completely alien to our culture and I am wondering where it came from. But on the other hand, we’ve made so many forward strides since independence that it’s very hard to roll all that back. So nobody has dared to suggest that women in Malaysia cannot drive, and that sort of thing. But still, in terms of personal laws -- that’s where my organisation comes in and -- we’re very worried about this trend. Of course, the most worrying thing is the move first by the opposition and now by our government, to push forward what we call the hudood bill. It is intended to make Shariah courts more powerful than they have ever been and to implement so-called Islamic laws for various crimes. That’s what’s worrying.

PRS: On a scale of 1-10, to what extent is Saudi Arabia itself responsible for this radicalisation? Does the inspiration come from this one country alone? Or are there other causes too?

Mahathir: They are a factor perhaps a five on that scale. But there are many other reasons. The sluggish economy, lots of listless men who have nothing to do and get attracted to this type of ideology. In addition, we have a government that is politicising religion, that seems to be in a race with the opposition to show who is more Islamic. It all combines to move towards this type of radicalisation.

PRS: Still, there was some good news today. An appeals court overthrew an earlier decision against your petition for a judicial review of a fatwa issued against your organisation, The Sisters of Islam and has ordered the courts to look at it again. Does your petition have widespread support both in Malaysia and elsewhere in South East Asia?

Mahathir: I wouldn’t call it widespread. There are certainly many people watching it and we are very happy with the unanimous decision by the appeals court judges to allow the judicial review. But we face challenges all the time. Even the fact that the fatwa is supposedly on hold, doesn’t stop sermons being read against us or all sorts of other attempts to harass us every day. So yes, it was a good day today but we still face long challenges and I am sure it will not be easy, once we go back to court to hear the judicial review.

PRS: Are such fatwas new?  Do you feel that these recent fatwas are also due to growing Saudi influence?

Mahathir: Yes, I do think that there have been more in the past ten years. Partly because of all circumstances, not just the Saudi influence, particularly the politicisation of religion in this country and the competition between the government and the Islamist party. With the ruling party losing the 2/3rds majority in parliament, it is trying to win back rural voters who are mostly Muslim and thinks this is the best way to do so. They’ve mounted a campaign against pluralism, liberalism, Shias – all very similar to Saudi-style Islam. And we are caught in it and are very big targets because we are women talking about religion. And we’ve been around for long. We are not unused to this type of harassment. But we feel that it has become more intense nowadays and that’s because it’s being weaponised by the government. The Islamic Development Agency, a government body in the PM’s department, enjoys a budget of 1 billion Ringgit. Considering they don’t have that much to do, what’s all that money for?

PRS: Saudi Arabian King Salman is on a month-long Asia visit, supposedly to firm up oil deals, investments, business. But is that all there is to the trip? Or is there more than meets the eye? He is, after all, also going to the Maldives – and Wahabi Islam has been on the rise there too…

Mahathir: I am no expert. But I think there is probably a different agenda, though perhaps not a conscious one. It’s probably to make an impression upon the Muslims here, to dazzle them with the huge entourage and the money being thrown around in such a way, that they somehow equate all this wealth with Islam. It’s kind of a PR campaign: to promote a certain brand of Islam without considering that our part of the world is very, very different from Saudi Arabia.

PRS: Is this attempt to impress aimed primarily at the grassroots? People, who are dependent on tourism?

Mahathir: I don’t know how much money will actually reach the grassroots. After all, they’re staying in luxury hotels and no middle-class people go there. But okay, the odd waiter may get a huge tip. A lot of Asians have this “Big Man Syndrome.”  A big man is surely entitled to all these luxuries and privileges, is the thinking. And it’s all very impressive to the grassroots. What’s worse is, the visit is being spun politically here in Malaysia. Our PM is justifying a controversial goods and service tax, a one-off payment to poor families, all only because Saudi Arabia has those provisions in place. So everything is being justified in relation to Saudi Arabia. In a way, that is saying that if Saudi Arabia is doing something then it must be a good thing and by implication, also an Islamic thing.

PRS: King Salman travelled to Malaysia first, before flying to Indonesia. How did people in your country react? Were there protests?

Mahathir: We Malaysians are a very passive lot. Nobody really protested. It was more like grumbling about a big dignitary being in town and causing traffic jams. But I am quite impressed by Indonesian women who have come out to protest against his visit, principally because of the sufferings of a number of Indonesian migrant workers in Saudi Arabia.

PRS: Do you have a sizeable Hindu population in Malaysia? Or even a small but influential one?

Mahathir: About 10 per cent of our population is of subcontinental origin. They are grouped as Indians but are not necessarily all Hindus. There is a nascent Hindu movement because of many cases of discrimination.  There is also an Indian component party of the ruling coalition but they did so badly in the party elections, so they have much of a voice anymore. Unfortunately, we are all living under a very domineering government. It is hard for minorities but even for Muslims who don’t agree with the government line. For them, there’s no space.