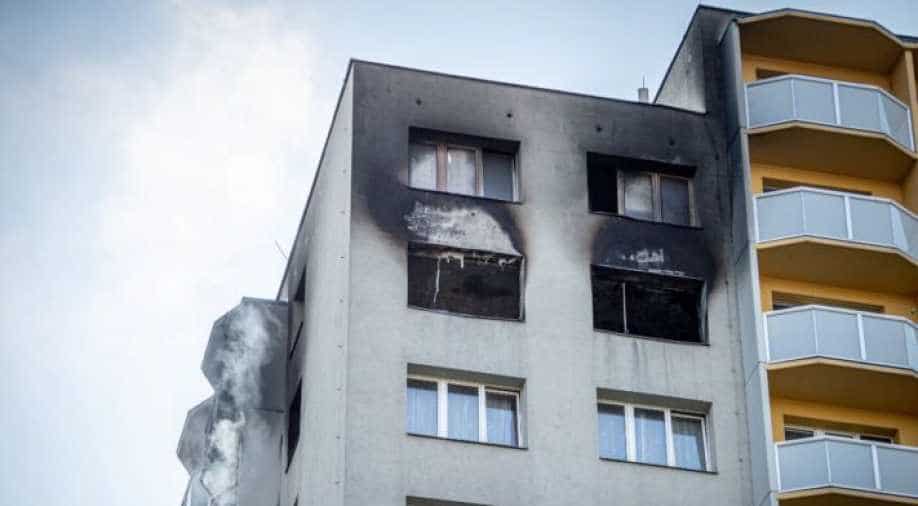 Police said one person was detained in connection with the blaze that saw five people jump to their deaths in the eastern city of Bohumin near the Polish border.

Three children were among 11 people killed in a fire Saturday at an apartment block in the Czech Republic that police believe was set deliberately.

Police said one person was detained in connection with the blaze that saw five people jump to their deaths in the eastern city of Bohumin near the Polish border.

Regional police chief Tomas Kuzel told public Czech Television that police suspected arson was the cause and that they had detained one person in the case.

"I think we are good when it comes to the culprit," Kuzel said without specifying whether the detained person would be charged with arson.

He likened the fire to a case in 2013 when a man caused a gas explosion and fire that killed three children and two other people as well as himself. He reportedly hated his fellow tenants.

"It's similar," Kuzel said of the conflagration seven years ago in the eastern Czech town of Frenstat. "The culprit there also basically liquidated a block of flats and left many people dead."

Lukas Popp, a spokesman for local firefighters, told AFP the fire had broken out on the 11th floor of the concrete block of flats in Bohumin on the Czech-Polish border, some 300 kilometres (190 miles) east of the capital Prague.

"Six people died on this floor, including three children and three adults -- and a dog," he added.

"Our firefighters were on the site really fast but during the action, five people jumped out of the 12th-storey window and died," said Popp.

Regional fire squad head Vladimir Vlcek told Czech Television he did not want to speculate about the causes of the fire for the moment.

"But the fire was very quick to develop, which is not normal. A fire like that typically affects one room, but this one hit the entire flat, all the rooms are burnt down," he said.

Vlcek added it was not clear why the five people had jumped out of the window when their flat was not yet hit by the blaze.

"All we would have needed was dozens of seconds to inflate the jumping cushion and the impact would not have been so tragic," he said.

Regional governor Ivo Vondrak said that besides the victims, thirteen people were injured in the fire, including two firefighters and one police officer.

Popp said the fire had been localised and investigators were looking into the causes of the deadly blaze.

Czech Interior Minister Jan Hamacek described the fire as "a huge tragedy" in a tweet.

"My deepest condolences to the bereaved," he said