Democrats step up calls for gun legislation as US Congress returns 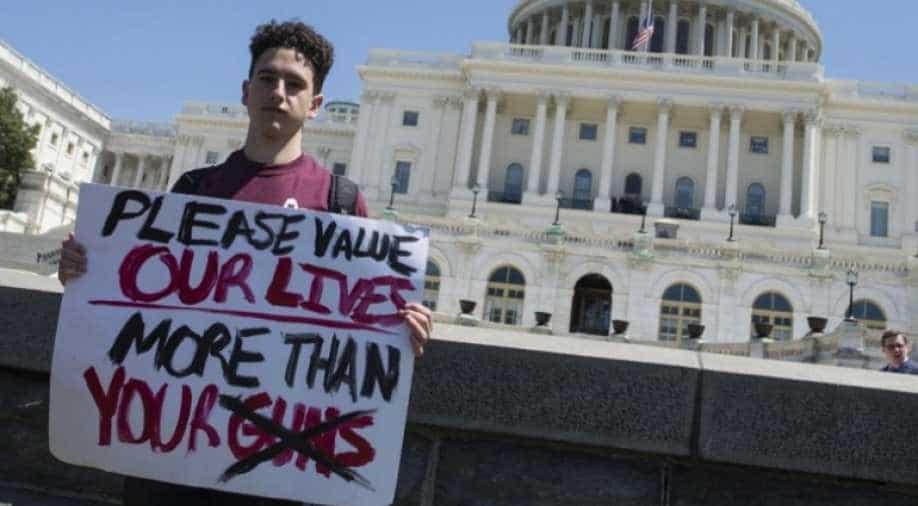 Protests against gun violence in the US Photograph:( AFP )

As Congress returns from its August recess on Monday, Democratic leaders in Congress are stepping up calls for Senate Majority Leader Mitch McConnell, a Republican, to take action to pass legislation to prevent gun violence.

House of Representatives Speaker Nancy Pelosi, Senate Democratic leader Chuck Schumer and other senior Democrats said on Sunday they will gather Monday afternoon to urge McConnell to "end his harmful legislative graveyard" and bring a House-passed bill expanding background checks on gun purchases to the Senate floor as soon as possible.

McConnell said he would not bring a gun bill to the floor of the Republican-majority Senate unless it had the support of President Donald Trump, a Republican who has not provided details of measures he might support to address gun violence.

After a cluster of mass shootings took 36 lives in August, Trump said he favoured action, possibly on tackling mental health issues related to the violence or expanded background checks. The White House has yet to outline any specific proposals.

White House officials said the measures might include expediting the death penalty for mass shooters.

Republican Roy Blunt, a member of the Senate Republican leadership, on Sunday urged Trump to say what he wants. "The president needs to step up here and set some guidelines for what he would do," Blunt said on NBC's "Meet the Press."

Meanwhile, Democratic presidential candidates have been floating their own remedies for mass shootings. One of the candidates, Senator Amy Klobuchar, told CNN on Sunday that she would back an immediate ban on assault weapons.

Previous attempts to pass gun controls after mass shootings, including in the aftermath of the December 2012 murder of 20 children and six staff members at the Sandy Hook Elementary School in Newtown, Connecticut, have mostly failed in the face of fierce lobbying by the National Rifle Association and other gun groups.

Here are some proposals that could be debated in Congress in the coming weeks and months:

The Democratic-led House of Representatives in February passed legislation to expand background checks on gun buyers. A loophole in federal law allows many sales — perhaps as many as one-fifth — over the internet and at gun shows to go unchecked.

While the bill was touted as being bipartisan, only eight House Republicans backed it, with 188 voting no. This is one measure Democrats are urging McConnell to bring to the floor of the Republican-controlled Senate.

Republican Senator Pat Toomey and Democratic Senator Joe Manchin have been trying to resurrect a somewhat weaker version of the bill, which the Senate defeated in 2013. It exempts from background checks all gun transfers, including sales, between close family members. The House-passed bill only exempts loans and gifts of firearms between such relatives.

Also passed by the House in February and stalled in the Senate is a Democratic bill to extend to 10 days, from the current three business days, the amount of time for a background check if information on an individual is incomplete.

On Aug. 7, Trump said there was strong support for doing something on background checks but he did not embrace a specific proposal.

Under the procedure, for example, family members or neighbours of a person thought to have weapons and be a potential danger could tip off authorities, starting the legal process.

The House Judiciary Committee is expected to consider two "red flag" proposals this week. Also on its agenda is legislation that would bar individuals convicted of misdemeanour hate crimes from owning firearms.

Bipartisan Senate legislation would require that state and local law enforcement be quickly notified by the National Instant Criminal Background Check System (NICS) when someone prohibited from purchasing a gun attempts to do so.

Currently, 37 states and the District of Columbia rely on NICS to conduct their background checks on gun sales, while the rest do it themselves.

Backers of the bill say “lie and try” incidents can be a warning sign of fresh criminal behaviour by individuals. As with most gun-related bills, there is no certainty that it will make it through Congress.

The Department of Homeland Security’s “Countering Violent Extremism Grants” program has withered under the Trump administration.

The $10 million federal program was aimed at helping state and local government agencies and nongovernmental organizations, or NGOs, work to stop “extremist” groups from engaging in violence, including mass shootings by followers. Shortly after coming to power in 2017, the Trump administration proposed eliminating the program and since then the grants have withered.

An El Paso, Texas, shooting in August has sparked some calls in and out of Congress for funding of the DHS office.

Republicans and the gun industry have argued that gun violence is rooted in psychological illness and that federal resources should be oriented toward treatment as a way of preventing mass shootings.

“Mental illness and hatred pulls the trigger, not the gun,” Trump said in a speech to the nation, blaming the violence on “mentally ill monsters.”

In the past, congressional Republicans have called for beefing up federal funding of research and treatment of mental illness as a response to gun violence.

Their opponents cite studies showing that few mass shootings are tied to mental illness and that focusing on it is a diversion from tighter gun control laws.

For years, gun control advocates have urged the prohibition of semi-automatic assault rifles that fire rapidly and can carry large magazines of ammunition. They were modelled on guns designed for military use.

Republicans, some Democrats and the gun lobby have fought off such attempts as a violation of the U.S. Constitution’s Second Amendment providing the right to bear arms.

On Aug. 7, Trump told reporters there is “no political appetite” for an assault weapons ban.

A group of House and Senate Democrats is urging passage of legislation they introduced months ago to ban high-capacity magazines holding more than 10 rounds of ammunition, saying these make assault weapons especially lethal. The House Judiciary Committee is expected to consider such legislation this week.