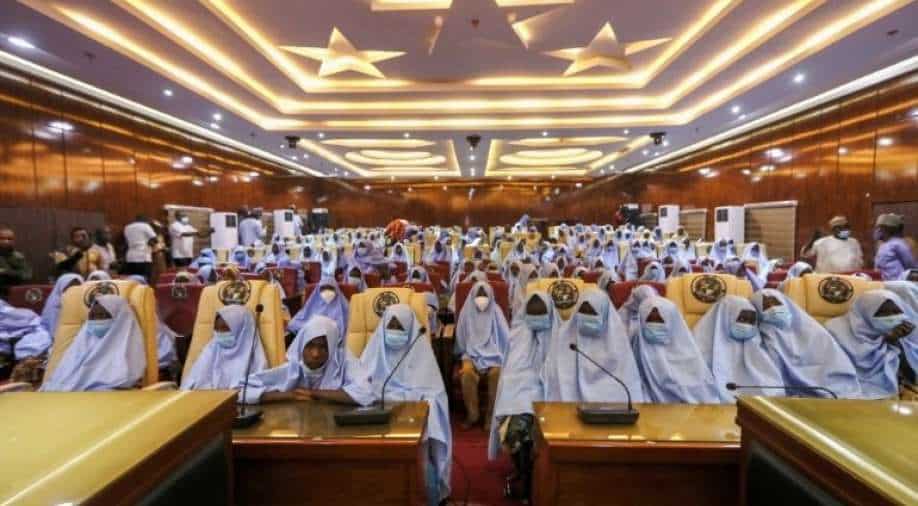 Girls who were kidnapped from a boarding school in the northwest Nigerian state of Zamfara Photograph:( Reuters )

Gunmen have freed all 279 girls kidnapped last week from a boarding school in northwest Nigeria, officials said on Tuesday, and victims told of how their abductors had beaten and threatened to shoot them during a forced march into captivity.

Dozens of girls in Muslim veils sat in a hall in a state government building before being taken for medical checks. A few parents arrived, and one father wept with joy after seeing his daughter.

Farida Lawali, 15, told how she and the other girls had been taken to a forest by the kidnappers.

Also see: Tragic tale of Nigerian girls who were recently abducted from school

"They carried the sick ones that cannot move. We were walking in the stones and thorns," she said, covered in a light blue veil. "They started hitting us with guns so that we could move," she added. "While they were beating them with guns, some of them were crying and moving at the same time."

"They said they will shoot anybody who did not continue to walk," another of the girls, Umma Abubakar, told Reuters, saying many had injuries that had made walking difficult.

Relief at their return was tempered by concern over the circumstances of their release. A series of similar school abductions in recent months has led many Nigerians to worry that regional authorities are making the situation worse by letting kidnappers go unpunished or paying them off.

Zailani Bappa, a media adviser to the state governor, denied that a ransom had been paid, but said the captors had been offered amnesty, as well as assistance to resettle at a site with newly built schools, a hospital and other facilities.

"The process means amnesty for those who repent and will be assisted to resettle. Hence, no monetary inducement or ransom was involved in the rescue. It was a willing surrender of the girls," he said. "Those who surrender their arms will be assisted to start a new life. Since they are herders, they will be supported with a few cows each."

President Muhammadu Buhari called for the captors to be brought to justice and said that if any ransoms were being paid, this would only make future attacks more likely.

The pupils from Jangebe, a town in Zamfara state, were seized just after midnight on Friday. All had now been freed, Zamfara Governor Bello Matawalle said.

The trend was started by the jihadist group Boko Haram, which kidnapped 270 schoolgirls in 2014, around 100 of whom have never been found. But recent months have seen a sudden escalation of similar attacks, including the abduction of 344 boys in December.

Friday's raid on the Government Girls Science Secondary School was the second school abduction in little over a week in the northwest.

Officials, speaking on condition of anonymity, have told Reuters that the authorities have made payoffs in the past in exchange for child hostages, creating an incentive for abductions.

Several of those officials declined to comment on Tuesday on whether they believed a ransom had been paid in the latest incident.

Initial reports put the number kidnapped at 317. Zamfara government spokesman Sulaiman Tanau Anka said the total was 279, as some of the girls had escaped into the bush during the raid.

Lawal Abdullahi, whose seven daughters were among those kidnapped and freed, said the incident would not deter him from schooling his children.

"It's a ploy to deny our girls ... from getting the Western education in which we are far behind," he told Reuters. "We should not succumb to blackmail. My advice to government is that they should take immediate precautions to stop further abductions."

The U.N. children's agency UNICEF urged the Nigerian government to protect schools so children and parents will not be afraid.

As recently as Saturday, gunmen released 27 teenage boys who had been kidnapped from their school on Feb. 17 in Niger state.