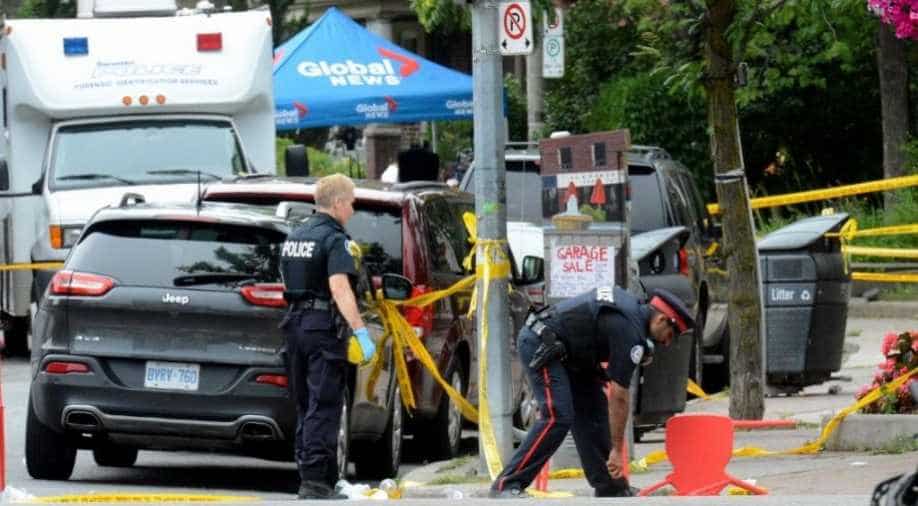 Since the beginning of the year, Toronto has been the scene of 370 shootings -- more than twice as many as for the whole of 2014 -- which killed 30 people.

But those working on the ground to make the community safer and steer youths away from a life of crime say tougher laws are not enough to stem the violence.

"I've seen things here that you only see in movies," said Christopher Rogers, a 35-year-old former gang member who grew up in the neighbourhood and now leads a youth awareness group.

"I have great memories here and I also have very sad memories here, stuff that changed my life and made me who I am today," he adds.

Regent Park was one of the largest social housing projects in Canada when it was erected in the late 1940s, but drug trafficking, shootings and gang activity have since then made it synonymous with crime.

Subject to an ambitious revitalization since 2005, it now looks very different, yet remains a hotbed of violence. Just last month, two young men were wounded in shootings.

Since the beginning of the year, Toronto has been the scene of 370 shootings -- more than twice as many as for the whole of 2014 -- which killed 30 people.

That prompted Mayor John Tory, along with other big-city Canadian mayors facing similar spikes in gun violence, to demand stricter gun controls from the federal government.

Liberal Prime Minister Justin Trudeau proposed a ban on assault rifles but stopped short of the handgun ban sought, saying only that he would help cities to restrict pistols and revolvers.

"You don't need military-grade assault weapons, ones designed to kill the largest amount of people in the shortest amount of time, to take down a deer," he said in Toronto at the start of his re-election campaign in September.

Conservative leader Andrew Scheer, who is neck-and-neck with Trudeau in the polls, said he supports tougher penalties for gun crimes rather than gun restrictions.

While regulation is essential and proven in Canada, researcher Adam Ellis says the political debate around guns is distracting from substantive issues.

"It's not necessarily the gun itself that's the problem," he told AFP, "The problem is the masculinities that are attached to the gun."

"Let's stop talking about the guns, let's have a bigger real conversation about toxic masculinity in society, how we socialize young boys to feel like they have to be violent... and the only way they can prove their manhood is through a loaded gun," he said.

Police attribute most of the violence to gangs and the many guns being smuggled into the country from a southern neighbour the United States.

In response to the recent spate of shootings, Toronto in August launched an 11-week action plan to boost outreach and policing in hotspots.

Within weeks, police say they made more than 200 arrests and seized a number of guns.

But some experts have criticized the crackdown, saying it is an "emotional response" that will only lead to more violence.

After decreasing between 2009 and 2013, violent gun crimes rose by 42 per cent across Canada in subsequent years to 2017, according to Statistics Canada. The rise was due in large part to the situation in Toronto, the agency said.

Ellis, who left gangsterism to became a criminology researcher at the University of Toronto, said the violence is rooted in social inequities in the city of six million people, where the cost of living, especially housing, has skyrocketed in recent decades.

"We see a lot of young males, and now we find more and more females, drifting toward a gang life as a way to survive," he says.

Ron Chhinzer, a detective in the Toronto Police Gang Prevention Unit, is also concerned about the age of those involved in the violence.

"The harsh reality is that we're seeing kids younger and younger committing more and more violent acts. You're seeing potentially 12 to 13 year-olds with guns," he says. "You're seeing them associated with shootings."