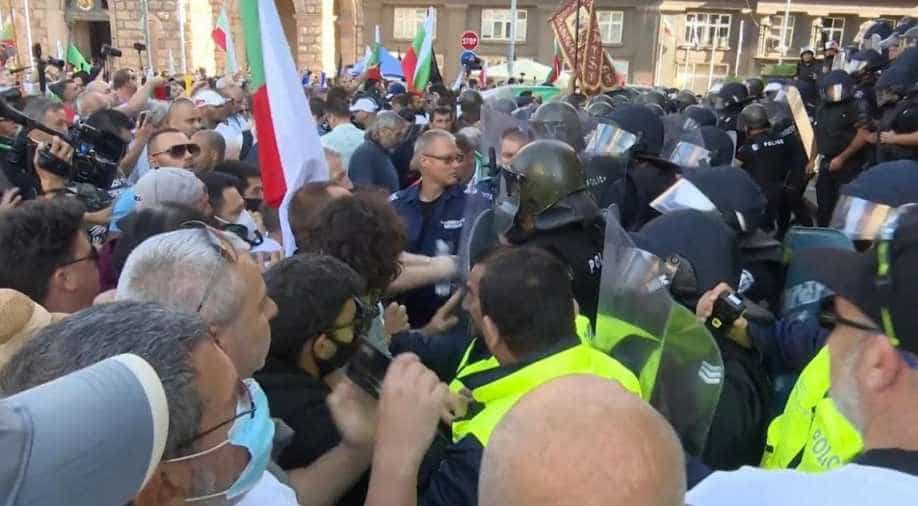 Scuffle between police and protesters in Sofia, Bulgaria Photograph:( AFP )

The rally outside parliament came during a long, tense day in which a controversial draft for a new constitution was proposed in a bid to end the protests that call for the Prime Minister Boyko Borissov to resign for alleged corruption and protecting oligarchs.

Anti-riot police guarding the Bulgarian parliament weathered smokebombs, firecrackers and stones on Wednesday as the latest in two months of anti-government protests took a violent turn, with at least 55 people hurt and nearly 100 arrested.

The rally outside parliament came during a long, tense day in which a controversial draft for a new constitution was proposed in a bid to end the protests that call for the Prime Minister Boyko Borissov to resign for alleged corruption and protecting oligarchs. In picture: Thousands of Bulgarians rallied in front of the parliament in Sofia calling for the resignation of Prime Minister Boyko Borissov/Reuters

Tensions rose in the late hours after some protesters threw over 100 small bombs and firecrackers at police. Officers brought a water cannon and cordoned off the square in front of the parliament. Some 60 people were arrested, police said.

Protest leaders appealed for a peaceful rally and said provocateurs attacked the police. Earlier on Wednesday scuffles broke out between protesters and police, who fired pepper spray and arrested 35 people.

Protesters threw eggs, apples and garbage. They also shook police vehicles, and about 100 officers were affected by pepper spray aimed at them by protesters, Sofia Police Chief Georgi Hadzhiev said. Health officials said some 45 people including police officers, were treated in hospitals.

The rally took place on the first sitting of parliament after summer recess. Protesters called it the "Grand National Uprising" in response the government's plan for a new constitution.

Protesters accuse three-times premier Borissov and Chief Prosecutor Ivan Geshev of failing to fight the corruption that erodes the rule of law and benefits powerful tycoons in the European Union's poorest country.

In parliament, President Rumen Radev called for the resignation of Borissov's centre-right government and appealed to deputies to dismiss plans for a new constitution.

"It was not the lack of new constitution that brought the people on the streets, but the lack of morality in the leadership, the erosion of statehood and the corruption," he said.

Borissov has pledged to resign if parliament approves his call for the election of a grand national assembly that would vote on a new constitution that should improve the independence of the judiciary and halve the number of deputies.

Protesters and opposition parties have dismissed the proposal as a ploy aimed at keeping Borissov, 61, in office longer as the vote on whether Bulgaria should have a new constitution may take place in November at the earliest.

The ruling coalition, undaunted by the protests, said it was starting debates for a new main law in the parliament, although for the time being it does not have enough votes to push ahead with its plan.