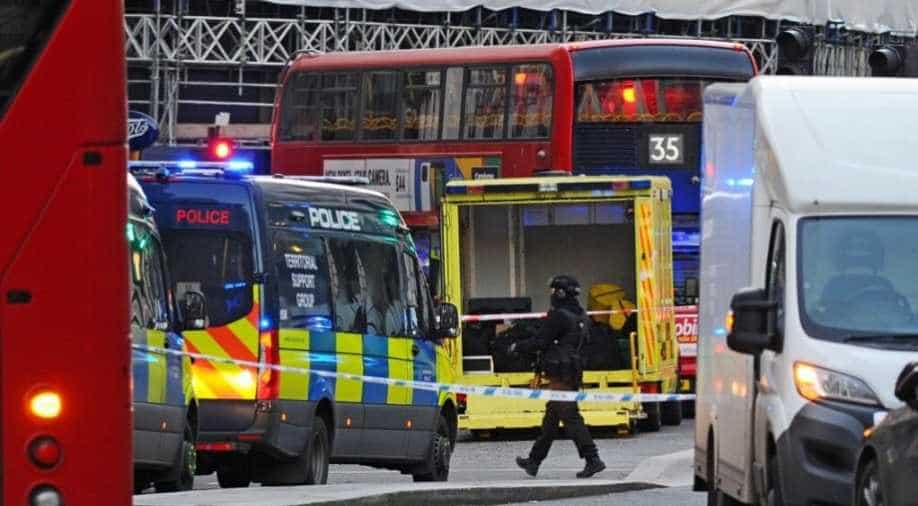 Police said they had been alerted at just before 2 pm to a stabbing at premises near London Bridge, the scene of a deadly attack by Islamist militants two years ago.

British police on Friday shot dead a man who had strapped a fake bomb to his body and stabbed a number of people in what they said was a terrorism incident in the London Bridge area of the capital.

Police said they had been alerted at just before 2 pm to a stabbing at premises near London Bridge, the scene of a deadly attack by Islamist militants two years ago.

"A male suspect was shot by specialist armed officers from the City of London police and I can confirm that this suspect died at the scene," the United Kingdom's top counter-terrorism officer, Neil Basu, told reporters.

"A number of other people received injuries during this incident," Basu said. "We believe a device that was strapped to the body of the suspect was a hoax explosive device."

A video posted on Twitter showed a group of about half a dozen men wrestling with someone on the ground on the sidewalk of the bridge. One of them backs away from the scene carrying a knife.

As he looks towards the melee, an armed police officer drags another person away from the man on the floor. Soon after, what sound like two gunshots ring out, and the man on the ground stops moving. Reuters could not immediately verify the footage.

The ambulance service declared a "major incident" in the area and London Bridge station, a busy commuter hub, was closed.

People in buildings around the scene were evacuated to the north side of the River Thames by security services.

Prime Minister Boris Johnson was on his way back to Downing Street and Basu said he would be giving him a full briefing.

"I'm being kept updated on the incident at London Bridge and want to thank the police and all emergency services for their immediate response," Johnson said in a statement.

London Bridge was the scene of an attack in June 2017 when three militants drove a van into pedestrians and then attacked people in the surrounding area, killing eight people and injuring at least 48.

The month before, a suicide bomber killed 22 children and adults and wounded 59 at a packed concert hall in the English city of Manchester, as crowds began leaving a concert by US singer Ariana Grande.

And in March the same year, an attacker stabbed a policeman close to London's parliament buildings after a car ploughed into pedestrians on nearby Westminster Bridge.

Six people died, including the assailant and the policeman he stabbed, and at least 20 were injured in what police called a "marauding terrorist attack".

Earlier this month, Britain had lowered its national terrorism threat level to "substantial" from "severe", its lowest level since 2014.