Beirut fire could be due to sabotage, ignorance or negligence: President Aoun 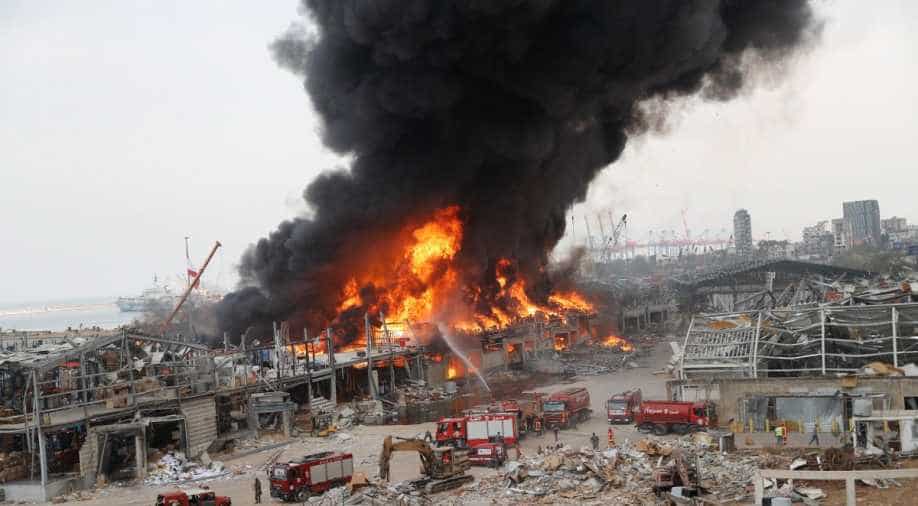 Beirut was rocked by a blast on August 4 at a port where 2759 tonnes of highly flammable ammonium nitrate was stored.

A massive fire broke out at Beirut port engulfing a warehouse, a month after the massive blast in which over 180 people were killed and several hundred were injured.

The reason for the fire is still unknown. The army reportedly said it the fire had engulfed a warehouse storing engine oil and vehicle tyres. Lebanon president said Beirut fire could be sabotage or accident.

Also Read: 'No signs of life' in rubble after three-day search for Beirut blast survivors

"Today's fire could be an intentional act of sabotage, the result of a technical error, ignorance, or negligence. In all cases, the cause needs to be known as soon as possible, and those responsible held to account," President Michel Aoun said

The army said it was sending helicopters to bring the fire under control. The blaze reportedly erupted in the duty free zone of the port.

"The warehouse on fire is where ICRC stocks thousands (of) food parcels and 0.5 million litres of oil," ICRC regional director Fabrizio Carboni said.

"Our humanitarian operation risks to be seriously disrupted," it added.

Beirut was rocked by a blast on August 4 at a port where 2759 tonnes of highly flammable ammonium nitrate was stored. The Lebanese government under Hassan Diab was forced to resign in the aftermath of the blast.

Outgoing prime minister Hassan Diab later testified before judicial authorities investigating the blast. Diab and President Michel Aoun had reportedly received a report on July 20 from the security agencies warning of the danger posed by the highly unstable material.

The Lebanese army had said last week that it had found another 4.35 tonnes of ammonium nitrate stored inside containers at an entrance to the port.