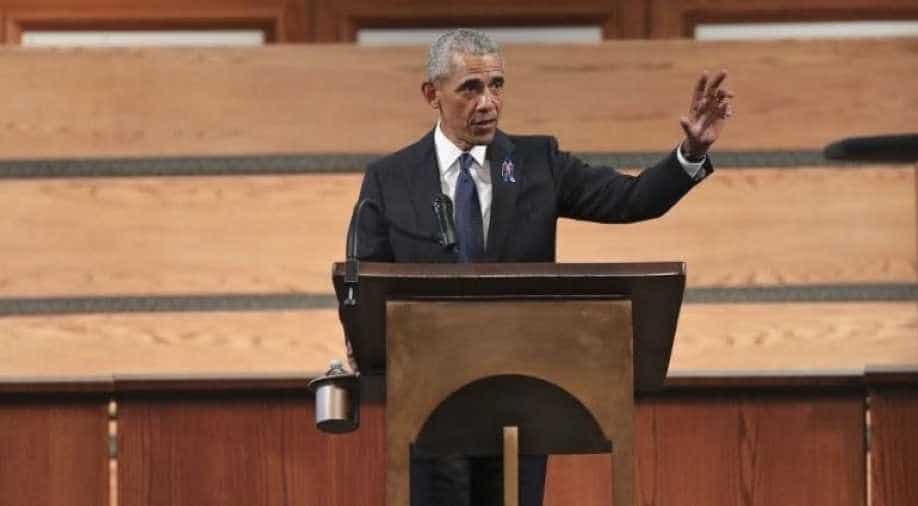 'Today we witness with our own eyes, police officers kneeling on the necks of black Americans,' Obama said at a funeral service held in Atlanta of civil rights icon John Lewis.

Former US president Barack Obama on Thursday launched a scathing attack on his successor, Donald Trump, criticising police brutality against blacks and use of federal agents against protesters.

"Today we witness with our own eyes, police officers kneeling on the necks of black Americans," Obama said at a funeral service held in Atlanta of civil rights icon John Lewis.

Also read | Michelle, Barack Obama reveal how they fell in love on podcast

"We can witness our federal government sending agents to use tear gas and batons against peaceful demonstrators."

Obama did not directly name the US president, but it was clear that the reference was to Trump, who ordered troops to clear protestors from Lafayette Square outside the White House and sent federal agents to quell demonstrations in Portland, Oregon.

"Even as we sit here, there are those in power who are doing their darnedest to discourage people from voting by closing polling locations and targeting minorities and students with restrictive ID laws and attacking our voting rights with surgical precision, even undermining the postal service in the run-up to an election that's going to be dependent on mail-in ballots so people don't get sick," Obama said.

Earlier Trump again criticised mail-in voting on Thursday, saying that the system will make the upcoming presidential election "most inaccurate and fraudulent" in "history".

"With Universal Mail-In Voting (not Absentee Voting, which is good), 2020 will be the most INACCURATE & FRAUDULENT Election in history," the US president said.

"It will be a great embarrassment to the USA. Delay the Election until people can properly, securely and safely vote???"

Obama also said at the eulogy that it was because of Lewis's struggles for African-American civil rights, he could become a president of the US.

Lewis did "everything he could to preserve this democracy and as long as we have breath in our bodies, we have to continue his cause," the former president said.

"As long as young people are protesting in the streets hoping real change takes hold, I'm hopeful...But we can't casually abandon them at the ballot box. Not when few elections have been as urgent on so many levels as this one."