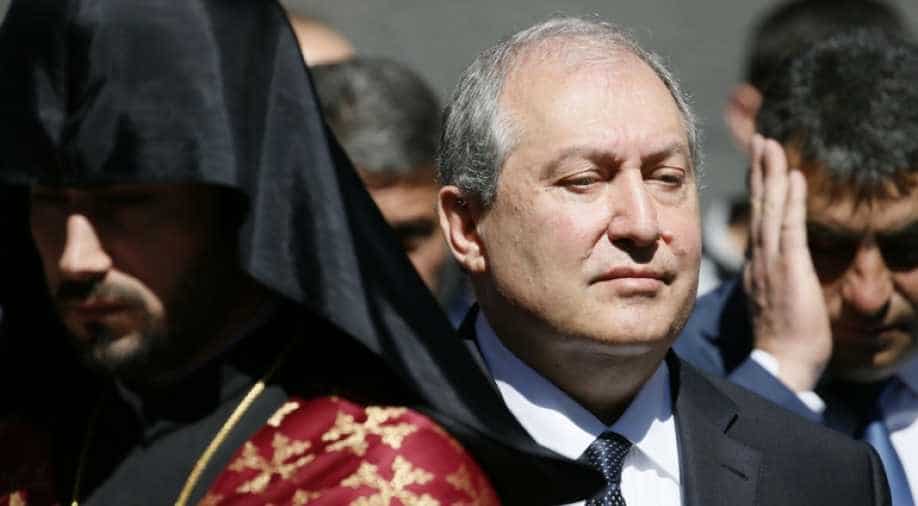 Armenia President Armen Sarkissian on Wednesday "deeply regretted" the current political crisis in the country and called for talks to resolve the crisis that has engulfed the small ex-Soviet state since protests led to the prime minister's resignation last week.

"I deeply regret that the political crisis continues despite the fact that everyone is talking about how dangerous it is for the future of the country," Sarkissian said, in a statement published by his press service.

"I call for consultations to be continued this coming week, to find a way out of the crisis," he said.

Armenian protesters blocked roads in and around the capital on Wednesday, responding to a call from opposition leader Nikol Pashinyan for a campaign of civil disobedience to force the ruling elite to relinquish its grip on power.

Ex-Soviet Armenia is locked in a political crisis after the ruling party, severely weakened after days of protests that forced its nominee for prime minister to quit, dug in its heels and refused to back Pashinyan to replace him.

The standoff is being watched closely by Russia, which sees Armenia as a close ally and is wary of it going the same way as Ukraine, where an uprising swept to power new leaders who pulled the country out of Moscow's orbit.

In the capital, Yerevan, all the main streets were blocked by cars, minibuses and garbage bins. The road to the international airport was blocked. A spokesman for the civil aviation authority said one flight had been cancelled.

Reuters reporters in Yerevan said shops and offices were open, and some people were still trying to get to work, despite the roadblocks. Protesters marched through the streets, shouting "Nikol! Victory!", waving flags and blowing horns.

Police tried to persuade protesters to open roads, but did not use force. Local media reported that there were also protests in several other cities in Armenia, a country of three million people that is home to a Russian military base.

Tiny Armenia is strategically valuable for Russia, nestled in mountains between NATO-member Turkey and energy exporter Azerbaijan, with which Armenia has been in a state of conflict since both emerged from the collapse of the Soviet Union.

Pashinyan, in an interview with Reuters at a protest in Yerevan where he was surrounded by cheering supporters, said he would keep the pressure on the ruling party.

"My only power is my people. We are not going to give up," said Pashinyan, dressed in his trademark camouflage T-shirt and cap. "We will continue our strike and disobedience."

Sargsyan was forced to resign after tens of thousands of people flooded the streets in the capital of Yerevan and other cities and towns to protest his political maneuvering to cling to power despite repeated promises not to run for the position of the prime minister.

Nikol Pashinyan, the leader of the opposition Yelq (Exit) movement who has accused Sargsyan and his ruling Republican Party of mass election fraud and vote buying, is demanding that the Republican-controlled parliament elect him as interim prime minister so he can organize free and fair elections in Armenia.

While addressing the people at the National Assembly on Monday, Pashiyan said that Serzh Sargsyan and Robert Kocharyan had been threatening all the Armenian MP's and preventing them to vote for people's candidate, claiming that the duo plan to return to power.

Pashinyan led days of protests that forced veteran leader Serzh Sarksyan to step down as prime minister last week and is the sole nominee to take over the role. But he needs approval from a parliament dominated by Sarksyan supporters.

For many Armenians, this is the first time since independence from the Soviet Union in 1991 that they are able to believe in a better future.

Armenia’s parliament is scheduled to vote for a new prime minister on Tuesday, eight days after former Prime Minister Serzh Sargsyan, who ruled Armenia for 10 years.