'A big win for the region': Ibrahim Shukralla comments on Abraham Accords at WION Global Summit 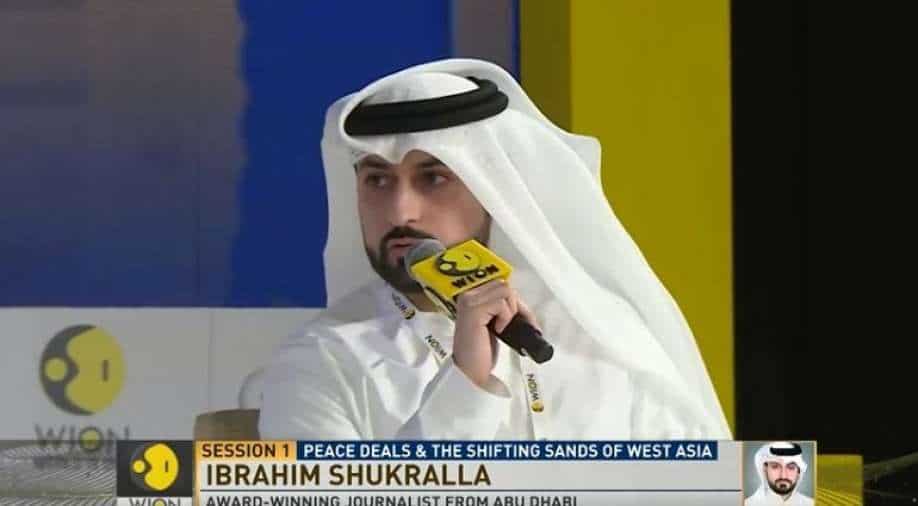 ''I see the profitability of the Abraham Accords for all the countries that normalise ties with Israel. During COVID, 13,000 Israelis tourists visited the UAE,'' he said

Talking about the shift in relationships in West Asia at the WION Global Summit's session titled Peace Deals and the Shifting Sands of West Asia, Emirati news editor  Ibrahim Shukralla, said he hopes Israel would not resume the annexation plan, as it would affect the peace plans.

Highlighting the significance of the Abraham Accords, Shukralla said, "I think it's definitely going to boost the chances and it's providing more diplomatic tools, more policy options. We are talking about a fresh dialogue now. So, we have all these things on negotiating table that were not existing before. This is what UAE has been saying after the accords."

He also talked about the profitability of the Abraham Accords. "If we are going to use the old methods with an old mentality which always failed...how would this gain progress if you are going to use the same thing every single time? I think the Abraham Accords was a historic  event and obviously, the UAE and Palestine will always be the cornerstone of the UAE's foreign policy and  I am sure foreign policy of most of the Arab states."

Talking about the relationship with Israel, he said, "I see the profitability of the Abraham Accords for all the countries that normalise ties with Israel. During COVID, 13,000 Israelis tourists visited the UAE."

About how this has been a big win for the whole region, he said dozens of MoUs have been signed between the two countries. Bilateral trade between Dubai and Israel in five months has been nearly $270 million, he pointed out.

Shukralla also highlighted examples of Morocco's Sahara being recognised by the US — which has been regarded as a national security matter. He also added the example of the US lifting sanctions from Sudan.