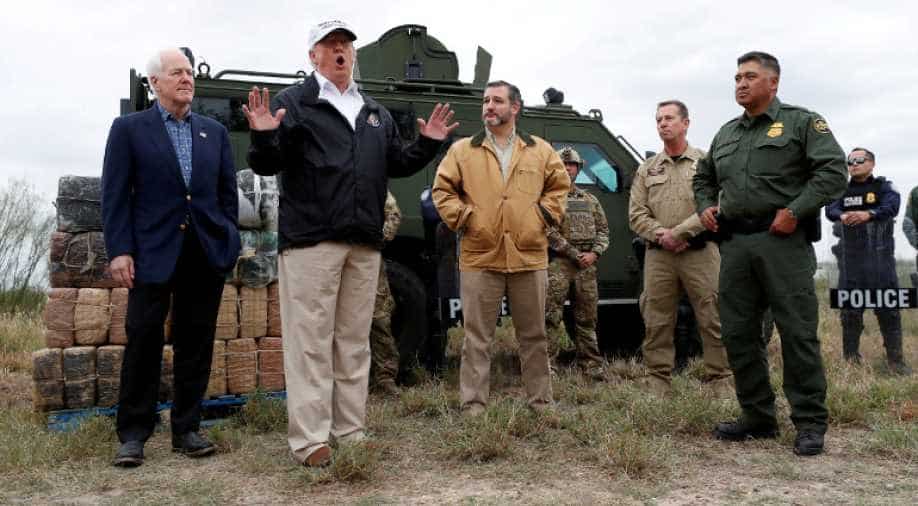 President Donald Trump speaks to reporters during his visit to the US - Mexico border in Mission, Texas, US. Photograph:( Reuters )

Mexican authorities said Thursday they had found 21 bodies on the US-Mexican border after a drug-gang shootout in a town near where President Donald Trump was due to visit later in the day.

Mexican authorities said Thursday they had found 21 bodies on the US-Mexican border after a drug-gang shootout in a town near where President Donald Trump visited later in the day.

The bodies -- some of them badly burned -- were found Wednesday in the border town of Miguel Aleman, about 170 miles (270 kilometres) from McAllen, Texas, the city Trump was due to visit as he continues his push to build his long-sought border wall.

"We have reports there was a shootout yesterday (Wednesday) between two criminal groups that ended with 21 people dead," the security spokesman for the state of Tamaulipas, Luis Alberto Rodriguez, told Mexican TV news channel Milenio.

"Some of them were burned. Seven vehicles were also located... It was a confrontation between two rival groups that are involved in a turf war over drug-trafficking routes."

The Mexican army found the bodies in a remote area following a tip-off, he said.

Tamaulipas has become one of the most violent states in Mexico as rival drug cartels fight each other for its strategic position on the US border.

Mexico has been racked by drug-related violence in recent years -- something Trump has alluded to in arguing his wall is needed to keep out violent criminals and narcotics.

McAllen, where he was meeting with border patrol agents, sits across from Tamaulipas. The US State Department has issued its most severe travel warning for the state because of violent crime, classifying it alongside countries such as Iraq and Afghanistan.

More than 200,000 people have been murdered in Mexico since the government deployed the army to fight the country's powerful drug cartels in 2006, including a record 28,711 in 2017.

Preliminary figures indicate the homicide record was broken again in 2018.