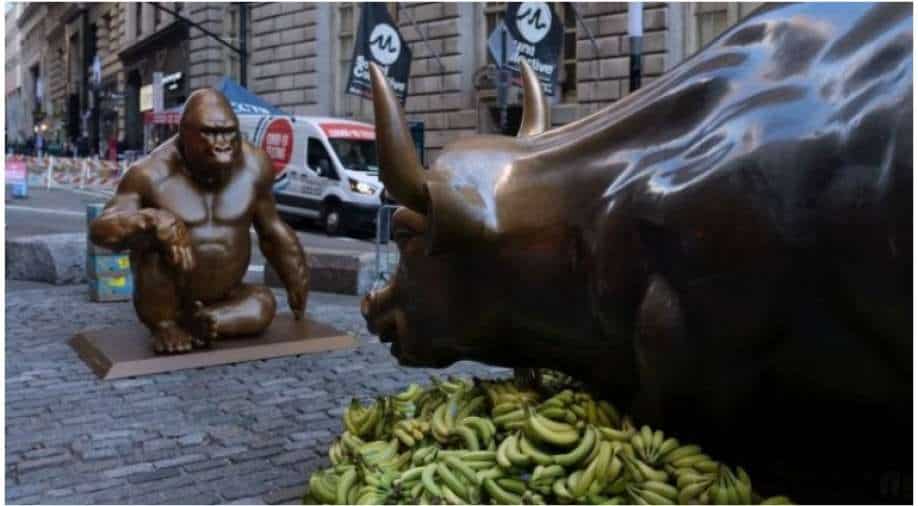 The iconic Charging Bull on Wall Street may be unstoppable. He may represent the Alpha behaviour that characterises the financial district. But he seems to have encountered a formidable foe in the form of Harambe the gorilla.

A seven-foot statue of the gorilla has been installed in front of the Charging Bull. What's more, the bull is surrounded by 10,000 bananas. The prime symbol of capitalism has a gorilla stoically sitting in his way, and he appears in no mood to budge.

The statue has been installed by Sapien. Network. It is a social media platform that describes itself as “dedicated to putting the needs and welfare of human beings first.”

Founders of Sapien. Network, Robert Giometti, Tejay Aluru and Ankit Bhatia were quoted by NBC as saying that the gorilla statue represents millions who struggle in America's capitalist system. According to them, the capitalist system “enriches wealthy elites and leaves the average person behind." Giometti adds that though the artwork is at odds with the system, it does not necessarily oppose Capitalism.

Harambe was a gorilla in Cincinnati Zoo. He was shot dead in May, 2016 by authorities when a 3-year-old ventured into his enclosure. The gorilla was cradling the child and as per many onlookers, appeared to be protecting the child. Harambe's killing had hit global headlines and caused an uproar.