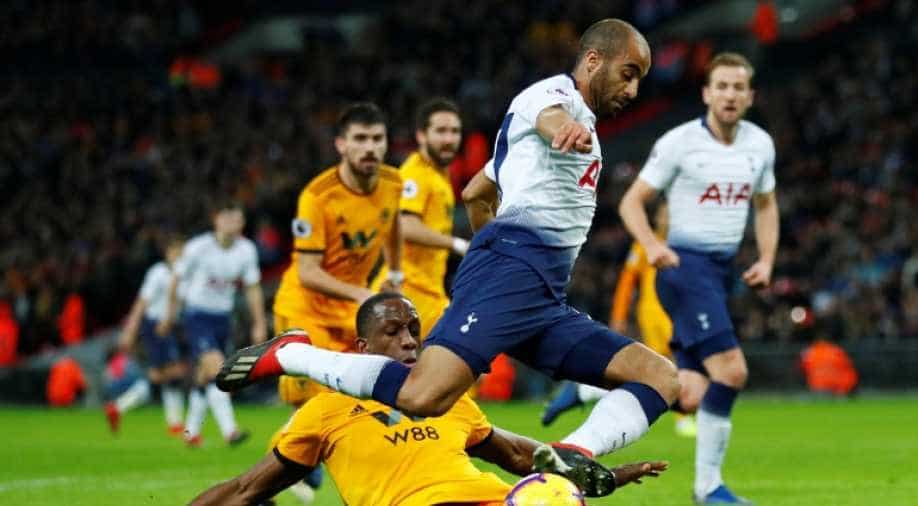 Tottenham Hotspur's status as Premier League title chasers was seriously harmed on Saturday as they fell to a first defeat in seven league games, losing the lead to go down 3-1 at home to Wolverhampton Wanderers.

Harry Kane fired a largely unimpressive Spurs side in front midway through the first half, picking the ball up from deep out wide, cutting inside and finding the top corner from outside the area with a sumptuous strike on his weaker left foot.

The goal was Kane's fourth in three league games but was not enough to see off the dogged visitors, who have taken points off some of the biggest teams such as Manchester City, Arsenal, Chelsea and Manchester United in their return to the top flight.

Nuno Espirito Santo's side levelled in the 72nd minute with a towering header from a corner from French defender Willy Boly after a period of sustained pressure around Tottenham's area.

Mexican forward Raul Jimenez then gave them the lead in the 83rd minute on the break, squeezing a perfectly struck shot under the diving Hugo Lloris and into the bottom corner. Helder Costa sealed the win with another counter-attack goal in the 87th.

A first home defeat since late October leaves second-placed Tottenham six points adrift of Liverpool, who can widen that gap when they host Arsenal later on Saturday. Manchester City could move second if they win at Southampton on Sunday.

"We decided the game was over"

Spurs coach Mauricio Pochettino criticised his side for easing off in the second half and assuming they had the victory wrapped up.

"In the second half we decided that the game was over and when you start to think that you run into problems," he told a news conference.

"We dominated possession in the first half then we missed that freshness to kill the game, instead we tried to manage it at 1-0. We know from experience that if you aren't at 100 percent in every game this can happen, it's not enough to play well for 60 or 70 minutes, you have to do it for 90."

Wolves coach Nuno said he would have been happy to settle for a draw but praised his side for their hunger in searching for the win.

"We had a lot of belief after the equaliser, I would have said a draw was a good result, but I cannot control the emotions of the boys if they see space in front of them," he said.

"It is good for the dressing room but to play like this at Wembley, the home of football, is the big thing."