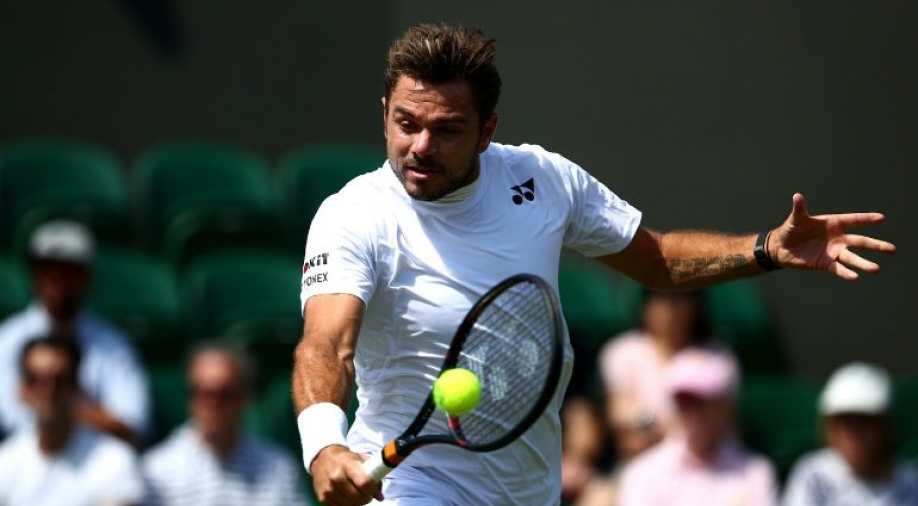 Switzerland's Stan Wawrinka in action during his first round match against Belgium's Ruben Bemelmans. Photograph:(Reuters)
Follow Us

Outside of eight-time champion Roger Federer, twice winner Rafael Nadal and defending champion Novak Djokovic, Wawrinka is the only other multiple Grand Slam champion in the draw

Stan Wawrinka was barely mentioned in the Wimbledon build-up with all the focus on the men's "big three" and the young guns hoping to shake things up but the Swiss means business.

Outside of eight-time champion Roger Federer, twice winner Rafael Nadal and defending champion Novak Djokovic, Wawrinka is the only other multiple Grand Slam champion in the draw.

With the weapons at his disposal, a beefy serve and a sublime backhand and a big match mentality, Wawrinka should at least part of the conversation when it comes to discussing contenders to make a deep run this fortnight.

The 34-year-old needs a Wimbledon title to complete his career Grand Slam and while, for whatever reason, he has never thrived on the All England Club lawns, he looked razor sharp as he began his 15th successive appearance.

On a sunny Court Two against Belgian qualifier Ruben Bemelmans he belted 26 winners in a 6-3, 6-2, 6-2 victory that took less than an hour and a half.

Admittedly left-hander Bemelmans, ranked 171, was having a decidedly ordinary day with his forehand misfiring completely but it was a powerful statement by Wawrinka nonetheless.

A year ago Wawrinka arrived at Wimbledon ranked outside the top 200 having had knee surgery after the 2017 Championships.

On that occasion he beat Grigor Dimitrov in the opening round but then lost to qualifier Tomas Fabbiano.

Surprisingly for a player of his class Wawrinka has only reached two quarter-finals at Wimbledon, in 2014 when he lost to Roger Federer and in 2015 when beaten by Richard Gasquet.

He has not been into the third round since 2015 and to end that sequence he will have a stern test next against giant American Reilly Opelka.