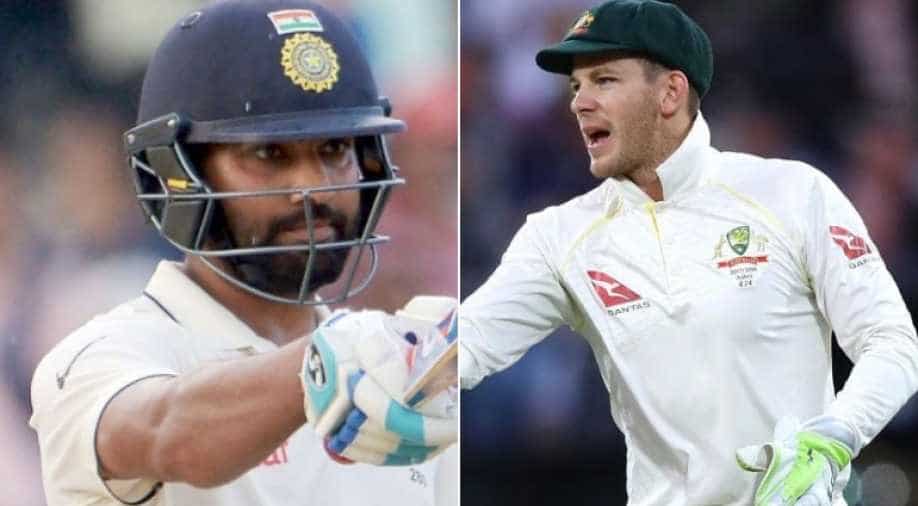 Paine was caught on the stump microphone provoking Rohit to go for a big hit against spinner Nathan Lyon.

Australian skipper Tim Paine once again tried to unsettle Indian batsman Rohit Sharma through his comments from behind the stumps on the day 2 of the third Test match.

On Thursday, Paine was caught on the stump microphone provoking Rohit to go for a big hit against spinner Nathan Lyon.

Paine was talking about which team he is going to support in the upcoming Indian Premier League and told Aaron Finch at short-leg that it was 'a toss-up between Rajasthan and Mumbai at this time'.

Before Lyon was about to bowl the next ball, Paine added, "If Rohit hits a six here, I'm changing to Mumbai".

“It’s been a toss up for me between Royals and Indians, and if Rohit hits a six here, I am changing to Mumbai,” said Paine.

He didn’t stop there. “Too many Poms at the Royals,” he added.

The chatter went on for a good couple of overs with Sharma breaking into a smile every now and then.

Such a banter was seen in the second Test as well when Kohli had a go at Paine on day three saying, “if he messes it up it’s 2-0, and who’s going to talk then?” For which the Australian captain retorted, “You’ve got to bat first, big head.”

When Paine resumed batting on day four, he had a few run-ins with Kohli once again with the umpire needing to step in once and remind the two that they are the captains and need to get on with the game.

A little while after the Indian captain was dismissed, Paine took a dig at Kohli to Murali Vijay who was still out in the middle then.

“I know he is your captain, but you can’t possibly like him as a bloke,” said Paine, which was caught on the stump mic.

Oh Tim Paine, you are the opposition captain but we seriously can't hate your banter. #AUSvIND

Tim Paine’s chatter behind the stumps is Epic😂He’s talking about who he’s fav IPL team between Mumbai and I guess RCB is ..#AUSvIND @SPNSportsIndia

In reply to India's mammoth 443, Australia were eight for no loss at stumps after Virat Kohli declared his side's inning to make the hosts bat for the remaining six overs of Day 2 of the third Test match at Melbourne Cricket Ground (MCG).