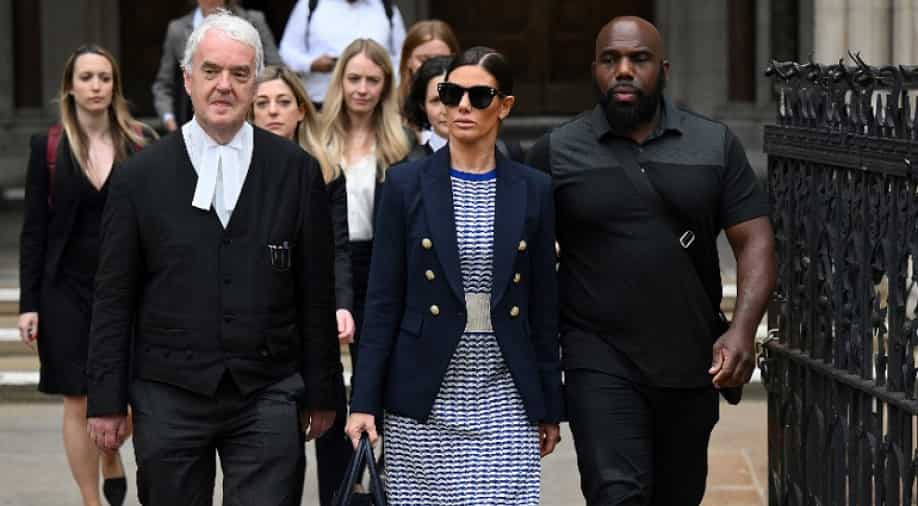 Rebekah Vardy and Coleen Rooney are locked in a legal battle. Photograph:( AFP )

Rebekah Vardy was quizzed by Coleen Rooney's lawyer in the ongoing WAGatha Christie case on Tuesday (May 17).

A libel trial pitting the wives of two former England soccer strikers Wayne Rooney and Jamie Vardy saw Vardy`s wife Rebekah take the stand on Tuesday and deny accusations she had leaked stories to the press about Rooney`s wife Coleen.

Their battle, mixing glamour, amateur sleuthing and intimate revelations has gripped the media and public. Coleen Rooney, 36, is the wife of former England ace Wayne who holds the record for the most international goals for his country, and Rebekah Vardy`s husband Jamie has also played and scored for the national side

Vardy, 40, is suing her former friend for libel after Rooney accused her of leaking stories about her after staging an elaborate sting operation to find out who was passing on details of her private life to the Sun tabloid.

The battle has been dubbed the "WAGatha Christie" case, a reference to the "WAG" moniker given to the glamorous group of footballers` wives and girlfriends and Rooney`s detective work.

"I didn`t leak anything," Vardy told London`s High Court, on the first day of the trial, having passed by Rooney and her husband to reach the witness box. "I didn`t give any information to a newspaper."

The intrigue began almost three years ago when Rooney became suspicious about stories appearing in the Sun involving information about her from her personal Instagram account. She turned detective to try to find out who the culprit was.

Also Read: Wagatha Christie: All you need to know about the legal battle between Coleen Rooney and Rebekah Vardy

She said she blocked everyone from viewing her account except one person and then posted a series of false stories to see whether they leaked out, which she said they had. She wrote on her social media accounts that only one person had viewed the false stories, concluding with the revelation: "It`s ... Rebekah Vardy`s account."

Facing questions from David Sherborne, Rooney`s lawyer, Vardy agreed leaking private, personal information was wrong. She was then quizzed about a 2004 newspaper interview she had given in which she detailed a sexual encounter with singer Peter Andre with derogatory details about his genitalia.

"I was forced into doing something I didn`t want to do," she told the packed wood-panelled courtroom, blaming her ex-husband for making her do the interview. "It was something that I was forced to say."

Sherborne also asked her about a message exchange she had with her agent Caroline Watt in 2017 about photoshopped photos of an unnamed friend to make her look thinner in which Vardy said: "Can we not leak a story?"
Vardy told the court she "didn`t mean it to say that" and she had wanted to do a story about promoting positive body image.

Earlier Hugh Tomlinson, Vardy`s lawyer, had said his client had received abuse and threats online, after Rooney`s post - constructed he said like a "mini-whodunnit" - had been liked by 193,000 people on Instagram and 300,000 on Twitter.

"She needs to be able to clear her name," Tomlinson said.

Sherborne argued Vardy had conducted a campaign of "deliberate destruction of evidence" by deleting media files and WhatsApp messages.

"Like any good detective story, you never find the person responsible standing over the body with the smoking gun in her hand," Sherborne said.

He suggested that Vardy had used her agent Watt as a "hitman" to leak the stories on her behalf. Vardy has accepted that Watt might be responsible, but denied any knowledge or authorising her to do so, Tomlinson said.

"She accepts that it`s possible that Ms Watt was the source," he told the court.

In a plot twist of which Agatha Christie herself might have approved, Watt`s phone had ended up at the bottom of the

North Sea after she accidentally dropped it over the side of a boat. The trial is due to last seven days with Rooney, who will have to prove that her accusations are either substantially true or in the public interest, and her husband due to give evidence.