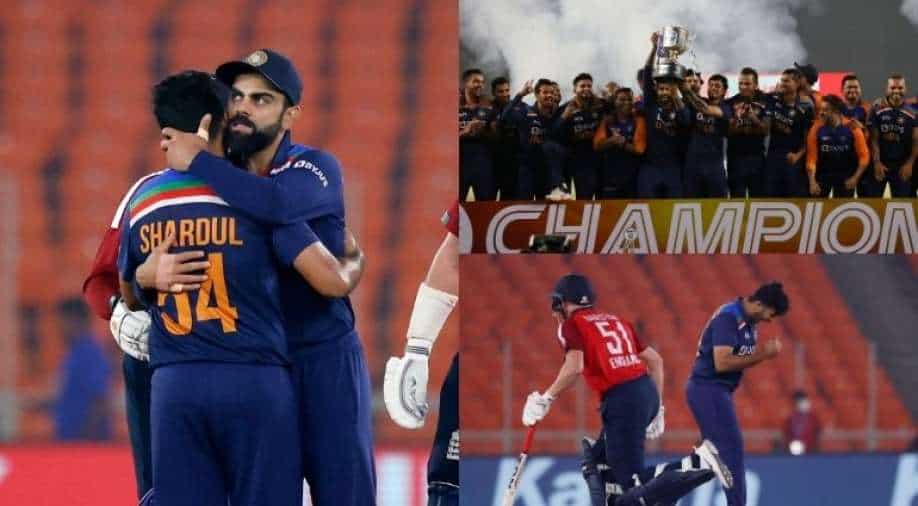 Earlier, Kohli passed a fitness test and promoted himself to open the innings with deputy Rohit.

Virat Kohli led from the front as India prevailed in a high-scoring decider, beating England by 36 runs in the final Twenty20 International to complete a 3-2 series victory on Saturday.

Rohit Sharma smashed 64 and Kohli remained not out on 80 to power India to 224-2, their highest total against England after being put into bat.

Dawid Malan and Jos Buttler struck half-centuries to fuel England's chase before India's seam bowlers took the game away from them.

Earlier, Kohli passed a fitness test and promoted himself to open the innings with deputy Rohit.

One of the game's cleanest strikers of the ball, Rohit looked in sublime form, smashing five sixes in his 34-ball blitz.

Ben Stokes ended the 94-run stand with a leg-cutter which Rohit chopped onto his stumps while attempting a pull-shot.

Suryakumar Yadav belted 32 before Chris Jordan's athleticism and presence of mind sent him back.

Stationed at long on, Jordan sprinted to his right to take a running one-handed catch and threw the ball to a grinning Jason Roy just before momentum took him over the ropes.

Kohli, who had been watching the batting carnage from the other end, accelerated in company of Hardik Pandya who made a quickfire 39.

Roy fell for a duck when England began their chase but Dawid Malan (68) and Jos Buttler (52) launched a spectacular assault to shrug off the setback.

Malan, the top-ranked batsmen in this format, roared back into form, forging a 130-run partnership with Buttler.

Kumar returned to send back Buttler, and Shardul Thakur dismissed Jonny Bairstow and Malan in the same over to turn the match on its head.

T Natarajan dismissed Stokes for 14 in the penultimate over to effectively seal the match in India's favour and England finished on 188-8.

The teams now move to Pune where they will play a three-match one-day series from Tuesday.