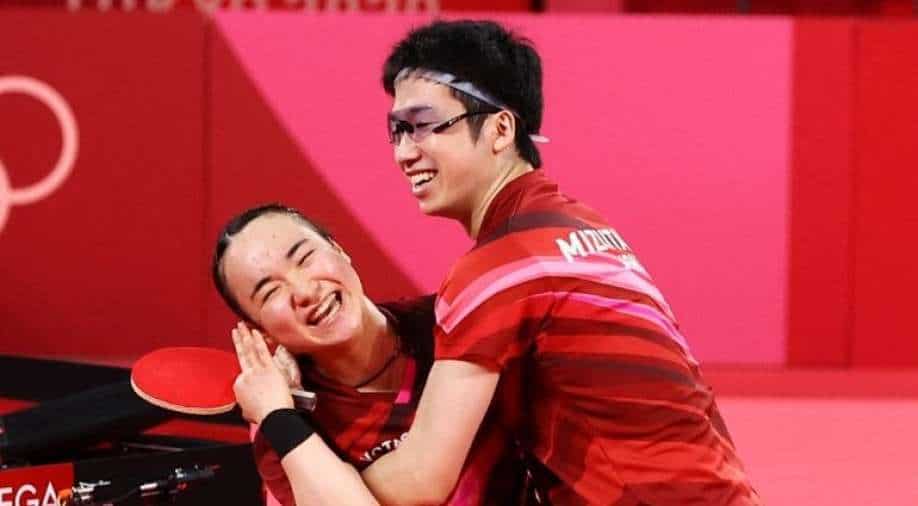 The 32-year-old Japanese paddler hugged his compatriot the moment they wrapped up the title, but he said the embrace was so strong that Ito pushed back and told him, "It hurts".

The 32-year-old Japanese paddler hugged his compatriot the moment they wrapped up the title, but he said the embrace was so strong that Ito pushed back and told him, "It hurts".

Men`s world No.2 Xu and world champion Liu led after the first two games but Mizutani and Ito fought back to win the third game.

For Mizutani and women`s world No.2 Ito, who are from the same hometown and have known each other since childhood, the 4-3 win over Xu and Liu was sweet revenge.

They lost to the Chinese pair in the mixed doubles finals of the ITTF`s World Tour Grand Finals and World Tour Swedish Open in 2019 plus the World Tour German Open a year later.

"We`ve lost to China at the Olympic Games and at world championships numerous times, but we were able to take a revenge on all that at the Tokyo Olympics," Mizutani told reporters.

China have long enjoyed a reputation as the powerhouse in the sport, winning 28 of the 32 golds awarded since it was added at the 1988 Games, including all eight women`s singles titles.

Xu and Liu, who silently tucked their silver medals inside their pockets once they stepped off the podium, both said their defeat was "unacceptable".

"I had a hard time accepting it," Liu said at the press conference after the defeat. "I feel sorry for my team."

"I know all the fans had high expectations for this final," added Xu.

"It doesn`t matter what happened before the final, people will only remember who`s the champion and who stands at the top of the podium. I think this result to the team is unacceptable."

In the bronze-medal match, world No.1 mixed doubles pair Lin Yun Ju and Cheng I Ching of Taiwan had a 4-0 clean-sweep win against French duo Emmanuel Lebesson and Yuan Jia Nan.