'There won't be another Virat': Virender Sehwag says won't be right to question Kohli's spot in T20I team 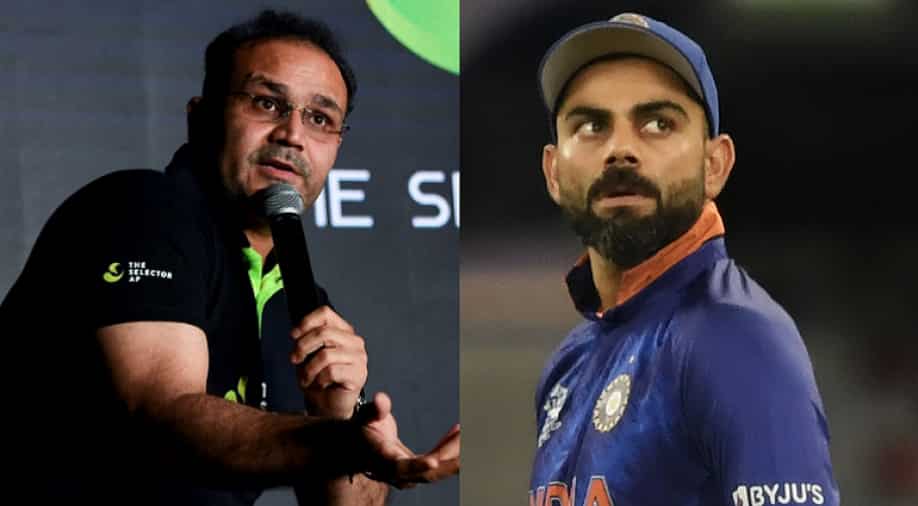 Virat Kohli has stepped down as the captain of the Indian cricket team in T20Is after leading the side in their last Super 12 game of the T20 World Cup 2021 on Monday. However, questions are now being raised on Kohli's spot in India's T20I team.

Virat Kohli's leadership credentials are being questioned once again after India endured a terrible campaign in the ongoing T20 World Cup 2021 and bowed out from the group stages of the tournament. Kohli & Co. bagged three wins in five matches in the Super 12 but failed to make it to the semi-finals as New Zealand finished above there in the Group 2 points table with eight points from five games and became the second team after Pakistan to progress to next round.

It was a disappointing start to the tournament for India as the Men in Blue suffered back-to-back defeats in their firt two matches against Pakistan and New Zealand respectively which eventually saw them miss out on a spot in the top four despite three big wins in their next three matches. Kohli has already led India in his final game in T20Is as captain after confirming that he will be stepping down from the post of captain in the shortest format.

However, questions are also being raised on his spot in the T20I side considering the recent dip in his performances. In the ongoing T20 World Cup 2021, Kohli managed to score only 68 runs in three innings and didn't come out to bat at no.3 in two matches. Former India opener Virender Sehwag recently gave his take on the matter and said Kohli can't be replaced in the Indian batting line-up in T20Is.

The former India batter said it won't be right to question Kohli's spot in India's T20I side and that he will continue to play for as long as he wants in the shortest format. Kohli had earlier explained his decision to quit captaincy was to manage his workload well and focus on doing well as a pure batter for the Indian team.

“No matter how many youngsters come, there won’t be another Virat Kohli. With the kind of consistency, he displays with the bat, even in this current side, it won’t be right to question his place in the T20 set-up. He will continue to play T20I for as long as he wants,” said Sehwag on Cricbuzz.

Kohli might have stepped aside as India's T20I captain but will continue to lead the national team in ODIs and Tests. BCCI will soon announce his replacement with Rohit Sharma leading the race to become the next T20I captain of the team under new head coach Rahul Dravid.