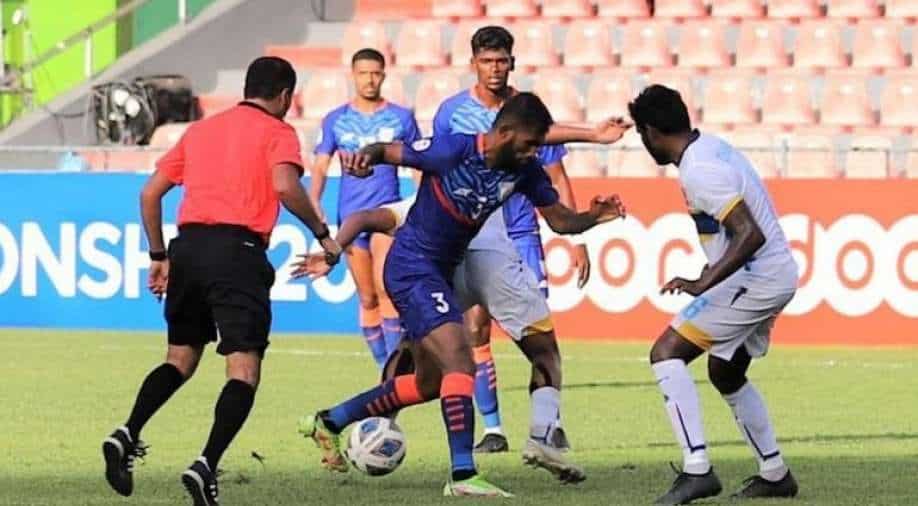 After drawing its first match against Bangladesh, The Blue Tigers drew their second match against Sri Lanka in SAFF Championships.

India played out a stalemate against Sri Lanka at the National Football Stadium in Male, Maldives, on Thursday, in their second game of the SAFF Championship 2021. The Blue Tigers now have two points from as many games.

According to information received here, India had a dominant start to the game, putting the two fullbacks to use, in order to stretch the opposition. Mandar Rao Dessai, who was playing left-back, went on a few dangerous outings, and on the quarter-hour mark, almost found Sunil Chhetri with a dangerous cross. However, the India skipper could not connect his header, as the ball went inches over him and into the keeper Sujan Perera`s hands.

Liston Colaco had a big chance in the 22nd minute, when Udanta Singh was played through into some space on the right flank, and swung a cross into the box. Liston had managed to lose his marker and had a free header, but mistimed it as the ball looped over the bar.

Moments later, it was Udanta again, who weaved past two defenders into the box, and passed it through to Seriton. The latter sold a dummy to a lunging defender, and looked set to send in a cut-back, but was flagged offside.

Udanta had a crack at goal from just outside the box after Anirudh Thapa worked a short corner to him, but again his shot went wide on the half-hour mark. The Blue Tigers controlled the ebb and flow of the game for much of the first half, but the Sri Lankan defence held tight, as the two teams went into the tunnel at halftime level on scores.

Blue Tigers boss Igor Stimac brought on Yasir Mohammad in place of Suresh Wangjam, at the start of the second half, and that substitution seemed to have an immediate effect. The midfielder acted as a pivot in the middle of the park, controlling the ebb and flow of the game.

Liston and Udanta kept charging at the Sri Lankan defenders from both the wings, looking to find their captain in the middle of the box. However, the rub of the green evaded the Indians. Yasir was again involved in a close chance a little under 10 minutes into the second half, when his free-kick was met by Chhetri inside the box, but the latter`s header was tipped over the crossbar by Sujan Perera.

Minutes later, Chhetri played Udanta through behind the defence, setting the winger up for a one-on-one finish against Perera, but the assistant referee had already raised his flag.

Mandar Rao Dessai booted a low cross across the face of the goal on the hour mark, and Thapa only had to connect with it properly to turn it in from close range, but the ball evaded him. That was the last real chance for Thapa, as Stimac soon replaced him with Sahal Abdul Samad, while bringing on Farukh Choudhary for Liston Colaco.

ALSO READ | Klopp as Bond? Liverpool boss has his say on next 007 after Daniel Craig suggested he could be a good fit

That substitution almost had an instant effect too, as Farukh volleyed a stray ball home from just inside the area; his shot took a deflection, before going through the keeper`s legs. However, the referee had already blown his whistle for a foul against Subhasish Bose.

With 10 minutes of regulation time left on the clock, Stimac brought Manvir Singh on for Mandar Rao Dessai, in a bid to boost the attack. That certainly gave the wingers more teammates to aim their crosses at, and with minutes of regulation time left, Udanta played a cut-back towards Manvir from a dangerous position, but the ball was eventually cut out.

Chhetri created another opportunity on the 89th, nodding a corner towards Subhasish, who looked like he could score from point-blank range, but his chance was again foiled by the Sri Lankan defence. Eight minutes of injury time were added on by the referee, and India created a couple of chances in the dying moments as well. In the first instance, Gurpreet hoofed a long ball upfield, to Subhasish, who nodded it to Manvir`s path, but Perera came out and smothered the ball.

With just one minute of injury time to go, Sahal had a golden chance, when Farukh sent in a low cut-back from the left. The midfielder, taking a touch, attempted to chip the keeper, but Perera was up to the task, as he leapt high and grabbed the ball.

The referee soon brought an end to the game, with the two sides playing out a stalemate.