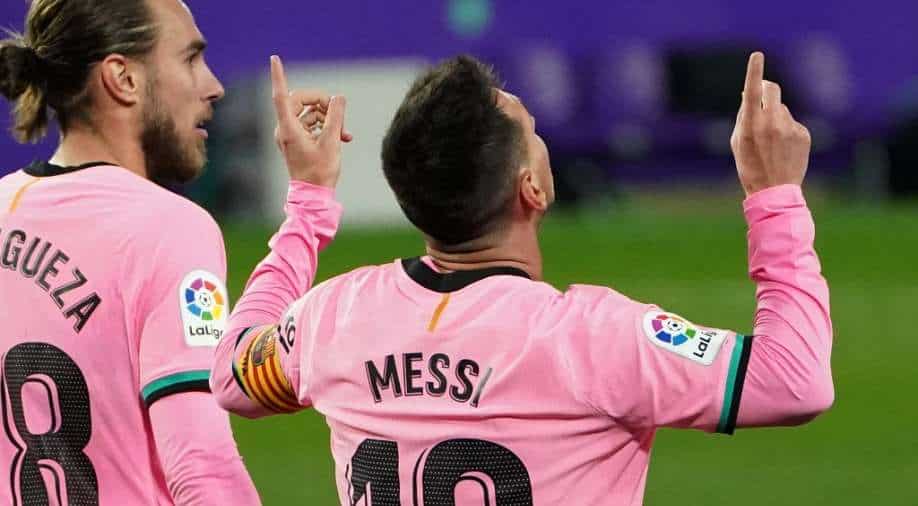 "This is a difficult place to come, Barca always used to struggle here but we came flying out of the blocks," said Griezmann.

Lionel Messi celebrated becoming Barcelona's highest appearance maker of all time by scoring twice as his rampant side crushed Real Sociedad 6-1 away in La Liga on Sunday with a stunning team display.

Antoine Griezmann opened the scoring by netting against his old club in the 36th minute and right back Sergino Dest stretched Barca's lead shortly before halftime after latching on to a sweeping pass from Messi.

Dest struck again early in the second half before Messi controlled a sumptuous pass from Sergio Busquets and scored to mark a night on which he overtook Xavi Hernandez as Barca's record appearance maker, with 768 games for the club.

Ousmane Dembele struck his side's fifth goal of the night in the 71st minute after a brilliant solo run while Sociedad's Ander Barrenetxea hit arguably the best goal of the game to give his side a rare moment of joy.

Messi, however, had the final say, finishing off a flowing team move in the 89th minute to score his 23rd league goal of the season, increasing his lead at the top of the scoring charts.

The victory took Barca above Real Madrid into second place in the standings on 62 points, four behind leaders Atletico Madrid with 10 games left to play.

"This is a difficult place to come, Barca always used to struggle here but we came flying out of the blocks," said Griezmann.

"We worked very hard, we won the ball lots of times deep in their half and reacted well every time we lost it. It was a great Barcelona performance."

Barca used to dread facing Sociedad away from home, failing to beat them in San Sebastian for more than a decade, and even though they ended up hammering the Basques they did not get off to the best start.

Sociedad forward Alexander Isak should have given the hosts an early lead from close range but could only shoot straight at keeper Marc-Andre ter Stegen, who denied the Swede again moments before Dest doubled Barca's lead.

"This wasn't our best game and they were clearly better than us and overwhelmed us," said Sociedad forward Mikel Oyarzabal.

"They were more ruthless than us; we went into halftime feeling bad as they scored all their chances while we couldn't convert ours and the second half was very different as a result. But no-one likes to lose like that."

Tennis Australia responds after ban on ‘Where is Peng Shuai?’ t-shirts at Aus Open