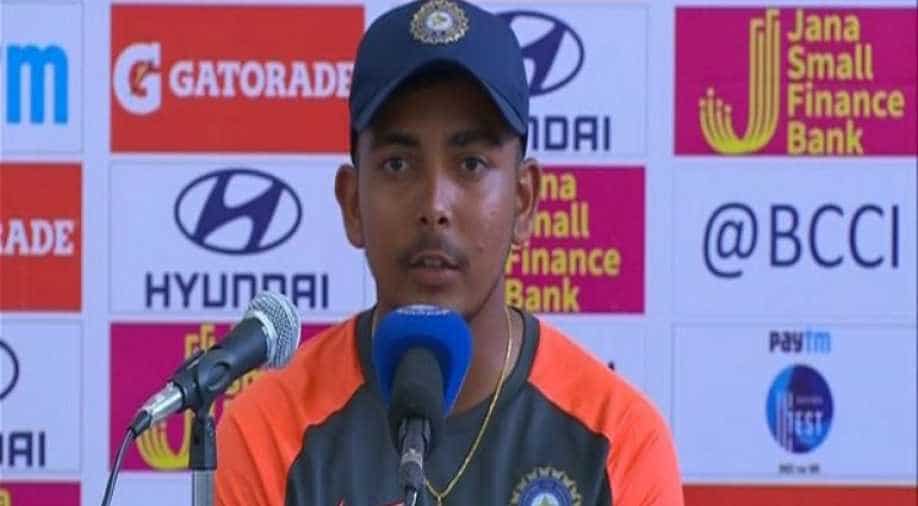 The player suffered the injury in the Ranji Trophy match against Karnataka at Bandra Kurla Complex. The batsman has now been rushed to the National Cricket Academy (NCA).

The player suffered the injury in the Ranji Trophy match against Karnataka at Bandra Kurla Complex. The batsman has now been rushed to the National Cricket Academy (NCA).

"He underwent an MRI scan last evening in Mumbai, and the reports confirmed a labral tear. He is in a lot of pain and is headed to Bangalore to meet the NCA physios. They will assess him and decide the next course," ESPN Cricinfo quoted Mumbai's coach Vinayak Samant as saying.

Shaw had picked up the injury on Friday when he fell on his left shoulder while backing up to stop an overthrow. He left the field immediately and did not return.

"Initially, it was more a precaution to get him off the field and rest him. I wanted him to bat, I thought he will bat even if it meant just going there, blocking and supporting the other batsman, but he wasn't entirely comfortable with that," said Vinayak.

"Then we received an e-mail this morning around 11 am from the BCCI to pull him out of the match and send him to the NCA for assessment. Losing him to an injury is disappointing, looking at his own game and from our team's point of view because we need to fight for every run if are to set a defend a target against Karnataka," he said.

Shaw was named in India A squad for the upcoming series against New Zealand and the side was slated to leave for Auckland on January 10.
Last year, Shaw was suspended by the BCCI for a doping violation.

BCCI, in their statement, had stated that they were satisfied with the explanation given by Shaw that he had taken Terbutaline inadvertently to treat a Respiratory Tract Infection and not as a performance-enhancing drug.