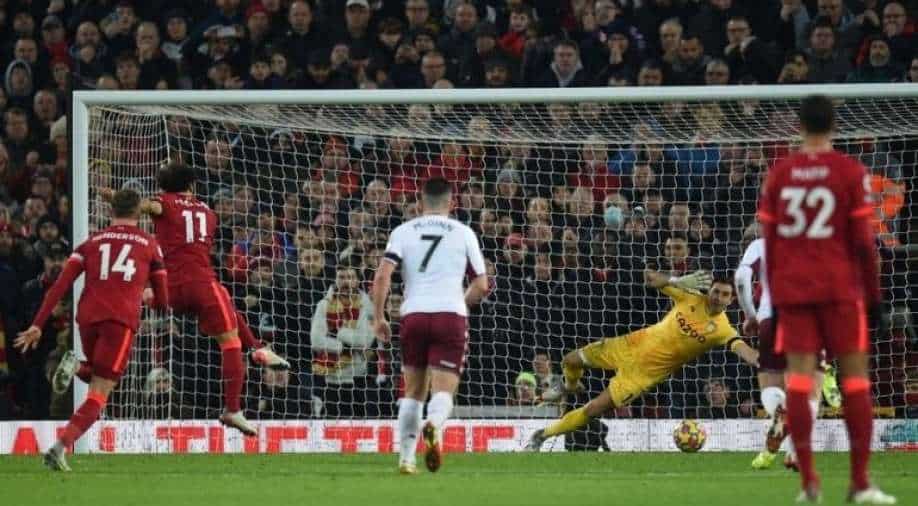 Aston Villa had won three of Gerrard's first four games in charge, but could not keep the ball for long enough to amount any sort of attacking threat themselves.

Liverpool ensured there was no happy return to Anfield for Steven Gerrard as Mohamed Salah's second-half penalty earned a 1-0 win over Aston Villa.

Gerrard said he would gladly sacrifice some of his legendary status among the Liverpool support for a result on his first trip to Anfield as part of the visiting team.

However, Villa barely laid a glove on the Jurgen Klopp's men, who should have been far more convincing winners as they moved back to within a point of Premier League leaders Manchester City.

Gerrard was welcomed with gentle applause as he emerged from the tunnel, but there was no great fanfare for the man who scored 186 goals in 710 games as a Liverpool player.

Even a brief chant of his name from the Kop was drowned out by cries of "Liverpool" as the crowd focused their attention on maintaining pace with City at the top of the table.

The Reds should have been well in front by half-time after dominating a frustrating 45 minutes.

Salah has now scored 21 goals in 22 games this season, but showed remarkable restraint to resist a shot at goal from Andy Robertson's cut-back to allow Trent Alexander-Arnold to blast an effort that was headed for the top corner until it deflected off Matt Targett and behind for a corner.

Robertson was the major threat for Klopp's men as he exploited the space he was afforded down the left.

The Scotland captain's deflected header nearly wrong-footed Emiliano Martinez before he had two strong appeals for penalties waved away for challenges by Marvelous Nakamba, who had already been booked.

Klopp grew increasingly agitated at the officiating of referee Stuart Attwell as Liverpool failed to make their dominance show on the scoreboard.

Villa had won three of Gerrard's first four games in charge, but could not keep the ball for long enough to amount any sort of attacking threat themselves.

A slip by Alisson Becker created the visitors' best chance of the first half, but Ashley Young failed to turn the ball goalwards beyond the imposing figure of Joel Matip.

Martinez got down sharply to his left to deny Salah just before the break with the first of a string of fine saves by the Argentine number one.

Virgil van Dijk was next to be denied by the former Arsenal 'keeper as Liverpool camped Villa inside their own half for the first 20 minutes of the second half.

Salah bent another effort narrowly over moments later, but he finally made the difference for the only goal of the game on 67 minutes.

Tyrone Mings was roped into a clumsy challenge on Salah and at the third time of asking, Liverpool got their spot-kick.

Martinez has earned a reputation as a penalty specialist, but Salah's strike was too precise for the Villa stopper despite guessing the right way.

Going behind suddenly sparked Villa into life as Gerrard introduced Danny Ings and Emiliano Buendia to offer more of an attacking threat.

And they too had a big appeal for a penalty turned down late on when Alisson's attempted clearance rebounded off Matip towards his own goal and the Brazilian goalkeeper escaped unpunished from a collision with Ings.