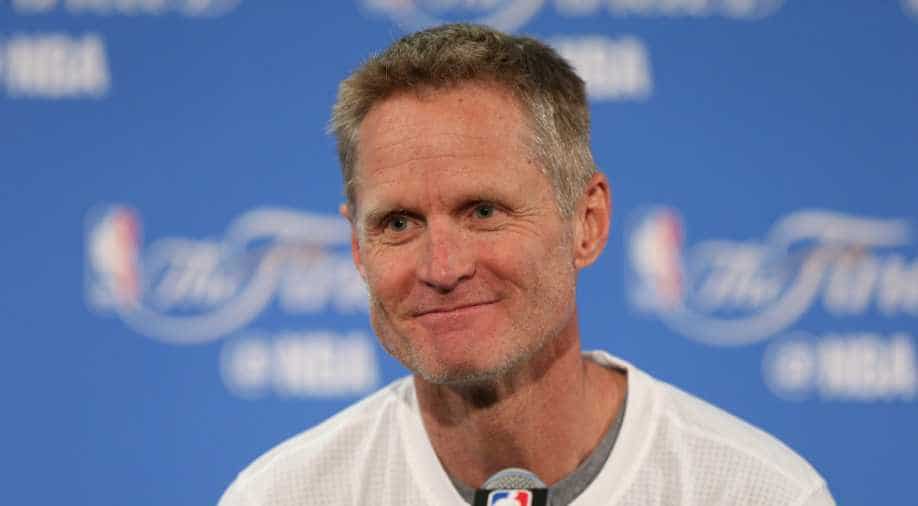 Kerr's father, Malcolm, who was the president of the American University of Beirut, was gunned down in the hallway outside his office in 1984. Photograph:( Getty )

Follow Us
Golden State Warriors coach Steve Kerr, whose father was murdered by a violent Islamic group in 1984, has made a passionate plea for stronger background checks on US gun purchases.

Kerr spoke on Friday on a podcast by San Jose Mercury News sports columnist Tim Kawakami about the Warriors` loss to Cleveland in the NBA Finals then took the conversation into politics.

"Our government is insane," Kerr said, for failing to pass gun control legislation.

Democratic members of the House of Representatives staged a 24-hour sit-in Wednesday and Thursday to protest the inability to even have a vote on gun restriction proposals.

Kerr`s father, Malcolm, was the president of the American University of Beirut.

He was gunned down in the hallway outside his office in 1984 while his son was a freshman basketball standout at the University of Arizona.

"When 90 per cent of our country wants background checks on gun purchases and we've got our Senate and our House not only voting it
down but using the Bill of Rights as a reason for people to have rights to carry these automatic weapons, and we`re getting people murdered every day at an alarming rate -- I just have to get this off my chest -- our government is insane. We are insane."

Kerr's call for arms control came two weeks after a terror attack at a gay nightclub in Orlando, Florida, left 49 dead and 53 others wounded in the deadliest mass shooting in US history, a massacre that came the night before Kerr`s Warriors lost game five of the NBA Finals on their way to squandering a 3-1 lead in the best-of-seven series, the worst collapse in finals history.

"What bugs me is this adherence to the right to bear arms," Kerr said. "That was back in 1776. People didn`t own automatic rifles.

"You had to have a musket in case the Redcoats were coming, the British were coming. And the beautiful thing about the Constitution is they left open amendments to change things because things change over time.

"I kind of think that our forefathers would not have OK`d automatic weapons to be sold to everybody if they existed back then. Let`s have some checks. It`s easier to get a gun than it is to get a driver`s license. It`s insane.

"And as somebody who`s had a family member shot and killed, it devastates me every time I read about this stuff -- like what happened in
Orlando -- and then it`s even more devastating to see the government just cowing to the NRA (National Rifle Association) and going to this totally outdated Bill Of Rights, right to bear arms."

Kerr, who spent much of his youth overseas, called for political change to toss out those who back the NRA`s desire to avoid any limits on gun ownership.

"If you want to own a musket, fine, you know, but come on. The rest of the world thinks we`re insane. We are insane," Kerr said.

"And until we vote these senators and congressmen and women out of office, the same thing is going to happen. And it`s infuriating."

Kerr wondered how US lawmakers might react if their family members were at greater risk of being slain in mass shootings.

"You wonder if any of these senators and congressmen and women who are so opposed to even holding a vote on not only the right to
buy an automatic weapon but just the background checks and the lists and all the stuff, how would they feel about this if their own child, their own mother, their own father, sister, brother, wife, husband was murdered. Mass murdered," Kerr said.

"How many times do we have to go through this before our government actually does something about it?"