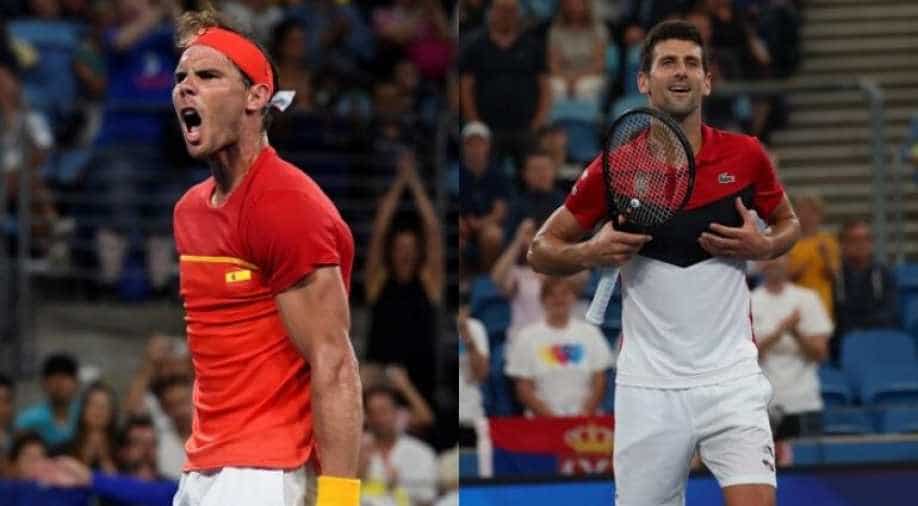 Under the format of the innovative team event in Sydney, the top-ranked singles players from each country play each other, ensuring the two legends clash for a 55th time since their first showdown in 2006.

Rafael Nadal and Novak Djokovic will face each other in the final of the inaugural ATP Cup after winning epic three-set matches Saturday to steer Spain and Serbia into the decider.

Under the format of the innovative team event in Sydney, the top-ranked singles players from each country play each other, ensuring the two legends clash for a 55th time since their first showdown in 2006.

Djokovic had an equally tough time against impressive fifth-ranked Medvedev, coming through a top-draw contest 6-1, 5-7, 6-4 on the back of Dusan Lajovic beating Karen Khachanov 7-5, 7-6 (7/1).

"Alex was playing at a very high level and for me my energy was a little bit lower than usual. But it has been a very emotional evening and a pleasure playing here," said Nadal.

"We know it's going to be a super tough final (against Serbia)," he added. "Novak likes a lot to play here, he's had a lot of great results. So let's see. We have a good team too."

De Minaur had a furious start, breaking Nadal in the opening game of the match and then keeping the pressure on, restricting the Spaniard's trademark forehand to take the first set in 46 minutes.

Full of energy, his serve was on fire and he was winning the baseline rallies, but Nadal weathered the onslaught and finally won a break point, converting to take the second set.

De Minaur was deflated and the fight went out of him as the 19-time Grand Slam showed him who was boss, racing through the deciding set.

Unassuming world number 10 Bautista Agut was in control and all over the groundstrokes of temperamental Kyrgios, who looked lost as he crashed 6-1 in the first set.

The Australian regained some lustre in the second set. But he was broken in the fifth game, mangling his racquet in frustration, and despite saving two match points with booming aces was outplayed.

"My game plan was to put him under pressure to play every point, to make him work. That's what I tried and it went well," said Bautista Agut.

- Exceptional -
Sixteen-time Grand Slam winner Djokovic, who is targeting an eighth Australian Open title this month, had looked on track for a comfortable win against Medvedev after sailing through the opening set and breaking in the first game of the second.

But the dogged Russian, who won their last two encounters, roared back.

He broke in the next game and then again for 3-1, with Djokovic smashing his racquet as Medvedev took the set to level the match.

A third set of long, high-quality rallies went with serve until Djokovic got the crucial edge in the fifth game, converting a volley to go 3-2 in front and Medvedev had no answer.

"It was an exceptional match. Lots of rallies and very exhausting. Daniil Medvedev is one of the best players in the world and he showed today why," said Djokovic.

"He's difficult to break from the baseline, he's tall and has a good serve. This was the most difficult challenge I have had so far this year."

Lajovic, who won his first ATP title last year at Umag, took a 2-0 record into his showdown with world number 17 Khachanov and produced a performance that belied his ranking of 34, displaying composure and a fine array of shots.

"It was definitely one of the toughest matches for me in my career, concerning the situation, the tension and the importance of the moment," he said. "But the crowd carried me."