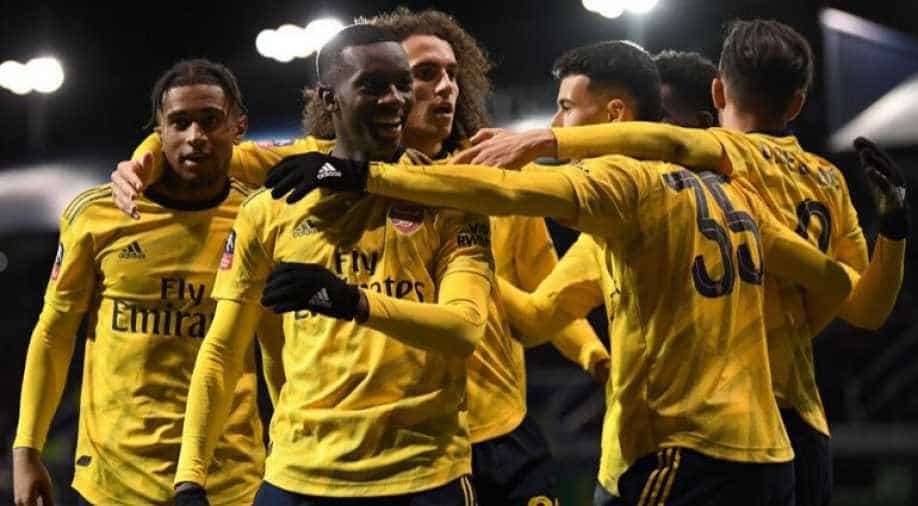 It was a much-needed boost for Arsenal, who crashed out of the Europe League in a painful last-gasp defeat against Olympiakos on Thursday.

Mikel Arteta admitted he took a risk by making nine changes for Arsenal's 2-0 win over Portsmouth in the FA Cup fifth round but insisted he had no choice because some of his stars were still shell-shocked after their Europa League exit.

Arteta's side reached the FA Cup quarter-finals thanks to goals from Sokratis Papastathopoulos in first-half injury time and Eddie Nketiah six minutes after the break at Fratton Park on Monday.

It was a much-needed boost for Arsenal, who crashed out of the Europe League in a painful last-gasp defeat against Olympiakos on Thursday.

Arteta conceded that fielding such an inexperienced line-up -- only David Luiz and Bukayo Saka retained their places -- could have put Arsenal's only chance of silverware this season in jeopardy.

"They fully deserve the chance and I know it is risky to play them in this competition but they are worth a risk," Arteta said of his young side.

Into the draw for the next round! 💪

Pierre-Emerick Aubameyang, who was in tears after missing a costly late chance against Olympiakos, and Mesut Ozil were both absent, while Alexandre Lacazette and Nicolas Pepe were on the bench.

"So I tried to pick the right team knowing how they were and I made the most of it. If you win, it is okay but if we had lost obviously it would have been the wrong decision.

"The energy, the focus and the willingness and desire to play in this competition is really important."

One sour note for Arsenal came when Uruguay midfielder Lucas Torreira was taken off injured on a stretcher just 15 minutes into the game and left Fratton Park on crutches.

"He was in a lot of pain, he is in a brace at the moment," said Arteta.

"He will be assessed in the next few days and we will know more. I don't know if it's the bone or ligaments, we don't know yet."

Portsmouth manager Kenny Jackett said Arsenal were worthy of their place in the next round after surviving an early barrage from the third-tier promotion chasers.

"I felt that we put quite a lot of pressure on them in the first half," he said.

"I'm disappointed with the first goal and the timing of it, we really needed to go in at half-time 0-0 and build it up for the second half," he said of conceding deep into first-half stoppage time.

"Fair play to my players, they never gave up and didn't buckle -- Arsenal have deserved to win the game but we are proud of what we have done in the competition and are still doing well in the league."