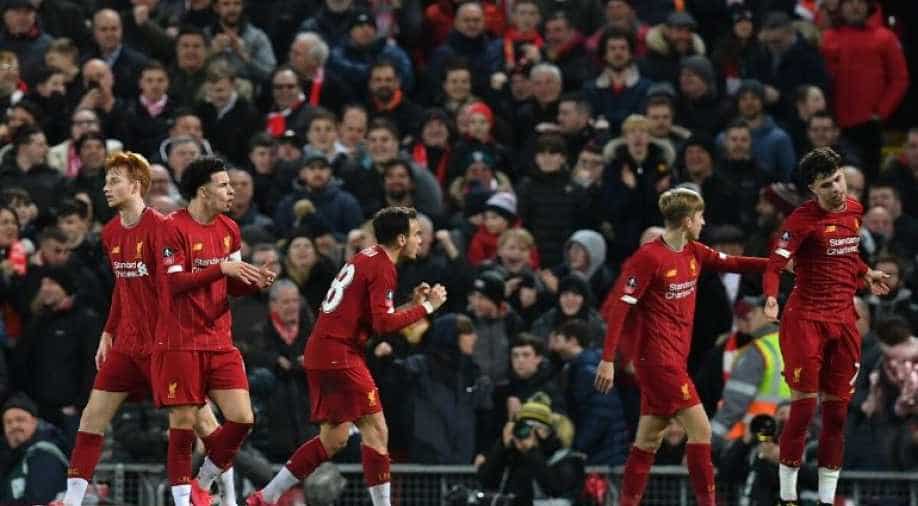 Klopp and his entire first-team were all absent for the fourth round replay at Anfield as part of the club's winter break.

Liverpool's youngest ever team proved coach Jurgen Klopp was right to rest his stars as they reached the FA Cup fifth round with a 1-0 win against third-tier Shrewsbury on Tuesday.

Klopp and his entire first-team were all absent for the fourth round replay at Anfield as part of the club's winter break.

We're into the #EmiratesFACup fifth round 🙌

The Liverpool manager was criticised for disrespecting the FA Cup, but his youngsters proved up to the task and their mature display was rewarded when Ro-Shaun Williams headed the decisive own goal in the closing stages.

"It's a proud moment for me to be the youngest player to captain the Reds. I’m happy that we topped it off with a win for our great fans." ❤️https://t.co/r5l0DVUMfn

Liverpool will face Chelsea in the last 16 at Stamford Bridge in March as they remain on course for a potential treble of the Premier League, Champions League and FA Cup.

Klopp had turned over the responsibility of leading Liverpool to the club's under-23 coach Neil Critchley, who also took charge when the Reds played an under-strength side for their League Cup quarter-final defeat at Aston Villa earlier this season.

On that occasion, Klopp had a better excuse for his absence as Liverpool were in Qatar on course to win the Club World Cup.

This time, it was purely his decision to ignore the FA Cup, but resting Mohamed Salah, Virgil Van Dijk and company at least gave fans a glimpse of the next generation.

With an average age of 19 years and 102 days, it was Liverpool's youngest ever starting line-up in all competitions.

There were seven teenagers, including 16-year-old Harvey Elliott, while Pedro Chirivella was the oldest player in the team at 22.

Liverpool had blown a two-goal lead in that original meeting, but several of these youngsters had helped stun Everton in the third round and once again they showcased their potential.

Despite dominating possession, Liverpool almost fell behind in the 58th minute when Shaun Whalley headed home, only to see VAR disallow the goal for offside against one of his team-mates in the build-up.

Liverpool made the most of that escape to win it in the 75th minute.

Neco Williams' long pass looked harmless but Ro-Shaun Williams tried to head back to O'Leary and, with the Shrewsbury keeper way off his line, the ball looped over him into the empty net.

"The manager sent a message prior to the game with some words of advice and support, which was fantastic," Critchley said of his contact with Klopp.

"He is delighted with the performance. There was a message at half-time and at full-time.

"He said Chelsea away could be an opportunity for one or two of them and they put in a performance tonight."

- Newcastle survive -
Newcastle reached the fifth round for the first time since 2006 after a dramatic 3-2 win at third tier Oxford.

Sean Longstaff opened the scoring in the 16th minute and Joelinton got on the scoresheet in the 30th minute, netting just his third goal since his big-money move from Hoffenheim last year.

But Liam Kelly got one back with a fine free-kick in the 84th minute before Nathan Holland equalised deep into stoppage-time.

Wayne Rooney booked an emotional clash with his former club Manchester United as second-tier Derby cruised to a 4-2 win over Northampton at Pride Park.

Rooney scored Derby's fourth goal from the penalty spot to wrap up an emphatic victory that brought the prize of a reunion with 12-time FA Cup winners United.

The former England star, who recently joined Derby after a spell with DC United, spent 13 years with the Old Trafford club and won a host of major trophies before returning to Everton in 2017.

"He's going to face the club where he had a wonderful career so of course, it is special," Derby boss Phillip Cocu said.

'Got quite a few plans for Virat': Scotland spinner warns 'King Kohli' ahead of T20 World Cup clash