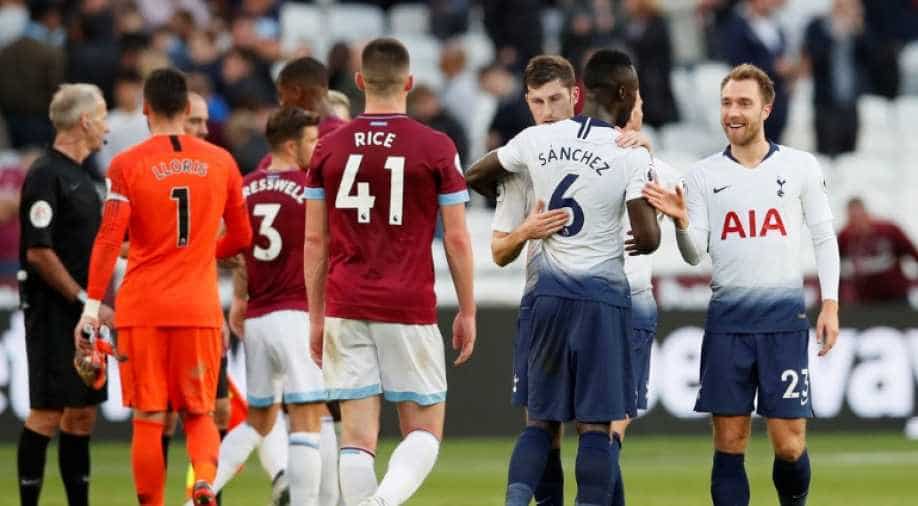 Spurs, who have continued their best ever start to a Premier League season, also had keeper Hugo Lloris to thank after he denied West Ham's livewire Austria striker Marko Arnautovic on three occasions, including a vital save in stoppage time.

Tottenham Hotspur secured a hard-fought 1-0 win over lowly London rivals West Ham United thanks to a deft first-half finish from Erik Lamela in their Premier League clash on Saturday.

The victory took Spurs into the top four with Argentine Lamela playing a starring role as he gave the visitors the lead just before the break with a glancing header into the top corner after a dribble and cross by Moussa Sissoko from the right.

Spurs, who have continued their best ever start to a Premier League season, also had keeper Hugo Lloris to thank after he denied West Ham's livewire Austria striker Marko Arnautovic on three occasions, including a vital save in stoppage time.

"Hugo was fantastic. It was an amazing victory for us with three points that keep us in a very good position," relieved Spurs manager Mauricio Pochettino told reporters.

"...we maybe deserved to go into halftime with one or two more goals. In the end we suffered a little bit. When it's a derby it's so competitive and emotional."

Tottenham certainly had the best of the first half and could have added to their score before the interval at a packed London Stadium but Colombian central defender Davinson Sanchez's low shot was well blocked by West Ham goalkeeper Lukasz Fabianski.

The home side started the second period brightly and almost equalised but Arnautovic's fine header from Aaron Cresswell's cross was superbly tipped over the bar by Lloris.

West Ham kept pressing and Arnautovic again tested Lloris on the hour with a rasping low drive before bringing another fine same from the France international in added time but the home side could not find a way through the Spurs defence.

The win takes Tottenham up to provisional third place with 21 points from nine games before Saturday's late match, while struggling West Ham remain in 15th spot on seven points.