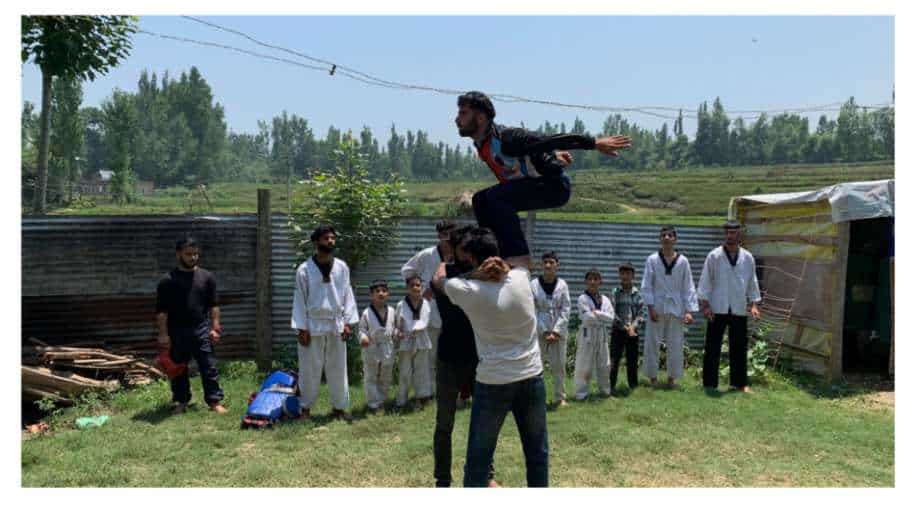 Bilal has been training in martial arts since his school days and today not only is he representing India at an International championship, but he is training hundreds of boys in his village in Martial arts.

Bilal Ahmad, a taekwondo player hailing from a small village in central Kashmir's Budgam district, will be representing India at the International Taekwondo Championship to be held in Bangkok, Thailand this year. Bilal has trained for years to accomplish the goal of playing for the country and with his dedication to the sport, one hopes that he would return with a medal.

Bilal has been training in martial arts since his school days and today not only is he representing India at an International championship, but he is training hundreds of boys in his village in Martial arts.

''In 2019, I participated in a National Championship at talkatora stadium In Delhi and won a gold medal. After that I got selected for the International championship. But due to covid this championship was postponed and now finally it is to take place in Bangkok Thailand this year. I will be leaving for Bangkok soon. I started training in martial arts from my school days. I started with Taekwondo from the beginning and started to learn. I, under the guidance of coach Shuja Sir, started to train. I worked hard and started to train at home till I participated in championships. I had to do everything on my own without any help from anyone. '' said Bilal Ahmad, Taekwondo Player.

As Bilal comes from a humble background, he is training kids in his village free of cost so that they don't have to face the same difficulties he faced while training for Taekwondo.

''All these children who I train belong to poor families, I am myself from a very middle-class background and faced a lot of financial problems regarding my training. I teach them because I know they are talented, and they need to be honed of the skills. '' stated Bilal.

The students of Bilal are overwhelmed after the news broke about Bilal's selection for the International championship. It gives these children from humble backgrounds the hope that one day, they can make it big too. And Bilal's hard work will pay off.

''I am extremely happy, and I am so proud of my teacher for being selected for the International championships. We are being trained by him as we have no stadium or ground available to us where we can be taught, but he is teaching them with his own money. It's all free of cost. I am also learning and have never paid him anything for it. If these young kids also work hard, I am sure they will make it big one day too," said Akhtar Hussain, Student.

If Bilal wins a medal for India at the International Championship, it will be a win for all youngsters in small villages of the country who dream of making it big in the field of sports.