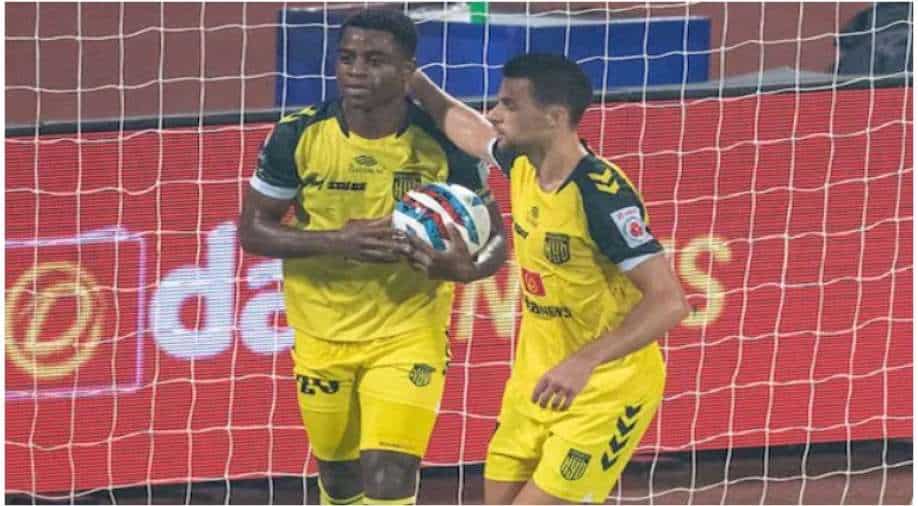 ATK Mohun Bagan and Hyderabad FC shared points after they played out a 2-2 draw in the Hero Indian Super League match at the Jawaharlal Nehru Stadium, here on Wednesday. Mohun Bagan`s David Williams scored for the team but Javier Siverio`s late strike ensured Hyderabad FC moved to the top of the table after a rip-roaring encounter.

Williams, playing ahead of Roy Krishna who started on the bench, took just 12 seconds to score before Bartholomew Ogbeche continued his goalscoring spree with an equaliser in the 18th minute. An own goal from Asish Rai (64th) almost poured cold water on Hyderabad`s hopes of going top of the tree before substitute Siverio flicked a loopy ball inside the box into the goal.

Bagan raced a 1-0 lead inside the first minute, Williams racking up his record goal with a powerful strike from outside the box that went in kissing Hyderabad keeper Laxmikant Kattimani`s gloves after Hugo Boumous set him up. The experienced Kattimani could have done better but at the other end, Amrinder Singh committed an even worse blunder in the 18th minute when he failed to hold on to a simple catch and the ball fell to Ogbeche.

The Nigerian in-form striker made no mistake, slamming the ball into an open net to net his ninth goal of the campaign. Amrinder was at fault once again as he passed the ball to Ogbeche where he should be cleared but the Hyderabad marksman could not make the most of it.

ATK Mohun Bagan suffered a setback when Carl McHugh had to be replaced just on the cusp of halftime after the Irish midfielder suffered a concussion and had to be taken off the field in an ambulance. Before halftime, Boumous picked up his fourth yellow card meaning he will miss the next game.

The second half saw Hyderabad put up a solid defensive display until Williams dribbled past Akash Mishra and crossed for Joni Kauko who nodded in expertly at the far post off a slight deflection from Asish Rai. The goal was adjudged as an own goal by Rai.

ALSO READ | Lionel Messi to Robert Lewandowski: A look at players with most goals in a calendar year since 2017

Having taken the lead for the second time in the game, the Mariners kept pushing for that insurance goal as Liston Colaco came close to scoring from a crisp Williams reverse pass.

Juan Ferrando added teeth upfront with the introduction of Roy Krishna in the 72nd minute in place of Williams who capped off a superb display. Just when it looked like Mohun Bagan would scrape through, Siverio made sure Hyderabad went top of the heap with an opportunistic strike.