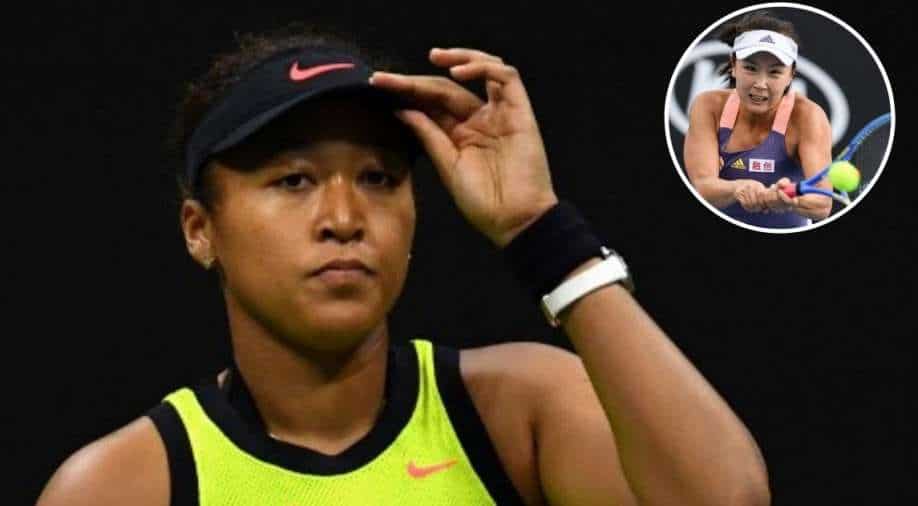 Naomi Osaka wrote she is in "shock" after a fellow tennis player [Peng Shuai] went missing shortly after revealing that she has been sexually abused. Photograph:( AFP )

'Where is Peng Shuai?'

Japanese star Naomi Osaka has raised concerns over the whereabouts of Chinese tennis player Peng Shuai, who went missing after she alleged that a powerful Chinese politician sexually assaulted her.

Shuai had claimed in a social media post on November 2 that China's former vice-premier Zhang Gaoli had "forced" her into sex during a long-term on-off relationship. Ever since she made the claims, she has not been seen or heard from publicly, leading to growing suspicion and global outrage.

As the world continues to wait and watch to get some information, the four-time Grand Slam winner Osaka took to her official Twitter handle and asked "Where Is Peng Shuai"? Osaka's questions have been added to growing concerns within the tennis fraternity about Peng's fate, with Novak Djokovic and several other players also spoken in the same context in recent days saying they were deeply worried.

Osaka wrote, "I was recently informed of a fellow tennis player that has gone missing shortly after revealing that she has been sexually abused. Censorship is never ok at any cost, I hope Peng Shuai and her family are safe and ok. I'm in shock of the current situation and I'm sending love and light her way."

In a recent development, the Women's Tennis Association (WTA) called for Peng's claims to be "investigated fully, fairly, transparently and without censorship".

Steve Simon, WTA Chairman and CEO, in a statement said, "Peng Shuai, and all women, deserve to be heard, not censored. Her accusation about the conduct of a former Chinese leader involving a sexual assault must be treated with the utmost seriousness."

"We expect this issue to be handled properly, meaning the allegations must be investigated fully, fairly, transparently and without censorship. Our absolute and unwavering priority is the health and safety of our players. We are speaking out so justice can be done," Simon added.