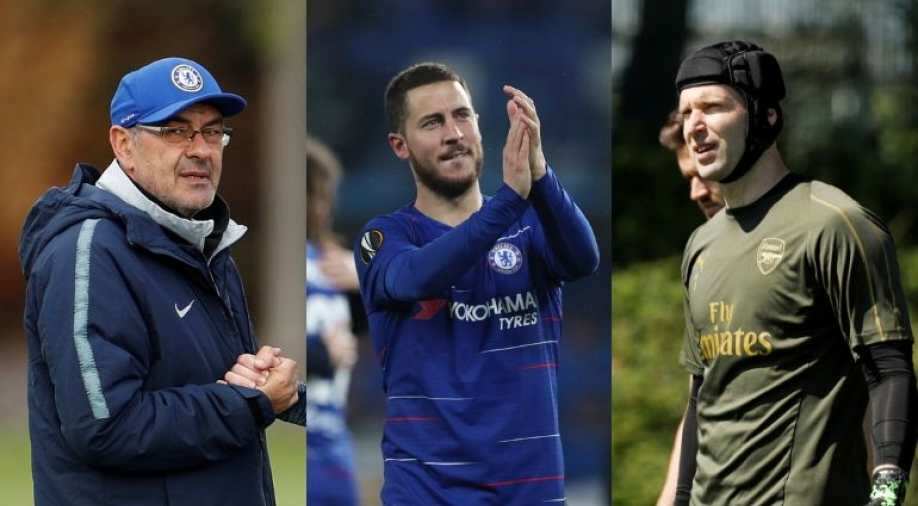 The Europa League final between Chelsea and Arsenal in Baku could be the farewell match for Chelsea head coach Maurizio Sarri and Eden Hazard as they are set to leave, while Arsenal could see Petr Cech retiring after the final clash.

Chelsea coach Maurizio Sarri, who has been heavily linked with a move to Juventus, had earlier said winning the final would turn a "very good season" into a "wonderful" one.

Sarri is still to win a major trophy, but he has already steered the Blues to a return to the Champions League and also took them to the League Cup final, where they lost on penalties to Manchester City.

The game could also be Eden Hazard's last as a Chelsea player amid reports he will finally move on to Real Madrid.

It will definitely be the last game for Arsenal goalkeeper Petr Cech, who will retire afterwards at the age of 37.

A Chelsea great who crossed London in 2015, he has been tipped for a return to Stamford Bridge in an upstairs capacity.

"I can speak about Petr Cech a lot, but above all he's a great man, a great professional. I want to do something important, with him playing or not playing,"  Arsenal coach Emery said.

Bernd Leno is the other option in goal, while Chelsea are sweating on the fitness of midfielder N'Golo Kante.

"Kante has a very little problem with his knee. The problem is the timing, but we are trying," said Sarri.