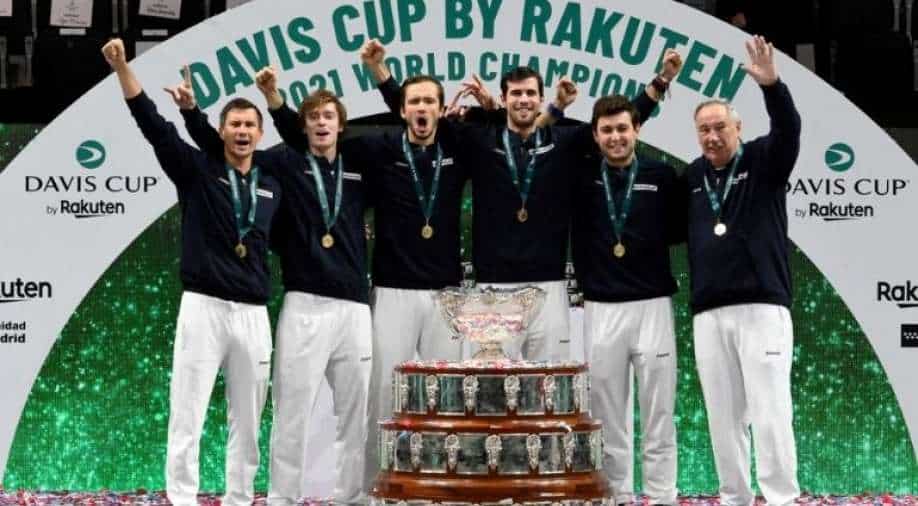 Russia claimed a third Davis Cup title on Sunday after Daniil Medvedev and Andrey Rublev both won their singles matches to defeat Croatia.

Croatia's greatest chance would have been in the doubles with world number one pair Nikola Mektic and Mate Pavic, but they always needed a surprise in the singles to take the tie to the final rubber.

Instead, Medvedev and Rublev, ranked two and five in the world respectively, held their nerve to make it nine out of 10 victories for Russia's power pair in the tournament.

"I can say that for all of us it's very important to win here. It's still the Davis Cup," said Medvedev in a press conference.

"No matter the format, the best players in the world are happy to represent their country. It's Davis Cup and we are the winners of it. That's the most important thing."

Cilic and Gojo were far from overwhelmed and, with Real Madrid's Luka Modric supporting in the crowd, they rose to the occasion in a compelling final that in the end turned on two close tie-breaks.

Russia have not won the Davis Cup since 2006 and failed to reach a single quarter-final between 2011 and 2018.

But Medvedev and Rublev are the leaders of a new generation of talent that could enjoy repeat successes in the future, with Aslan Karatsev and Karen Khachanov also ranked in the top 30.

Victory for the men also completes a Russian one-two after the women's team won the Billie Jean King Cup in Prague last month. The last country to do the double was the Czech Republic in 2012.

Croatia were no strangers to this stage, this their third Davis Cup final in five years after their 2016 defeat to Argentina and 2018 victory over France.

But Russia were firm favourites and it was always going to take something special either from Cilic, the 33-year-old former US Open champion, or Gojo, who is ranked 279th in the world.

Cilic had chances in the first set, including a break point on Medvedev's second serve at 4-3 but an aggressive backhand return hit the tape and instead it went to a tie-break.

They changed over with Cilic up 4-2 after a Medvedev forehand skimmed wide but Medvedev won four out of the next five points to create a set point on the Cilic serve.

Cilic saved it with a courageous smash only to send a forehand approach just out to give Medvedev a second chance, which he spurned with a double fault.

A big serve down the middle though gave Medvedev 8-7 and this time Cilic caved, a backhand going awry to hand away the set.

Rublev's precision from the baseline had earlier proved decisive but Gojo pushed him hard, particularly in the second set, when the Croatian led 5-4 in the tie-break.

Yet Rublev delivered under pressure, arrowing a superb pass down the line before an inside-out forehand winner opened up match point, which he converted when a Gojo backhand drifted long.