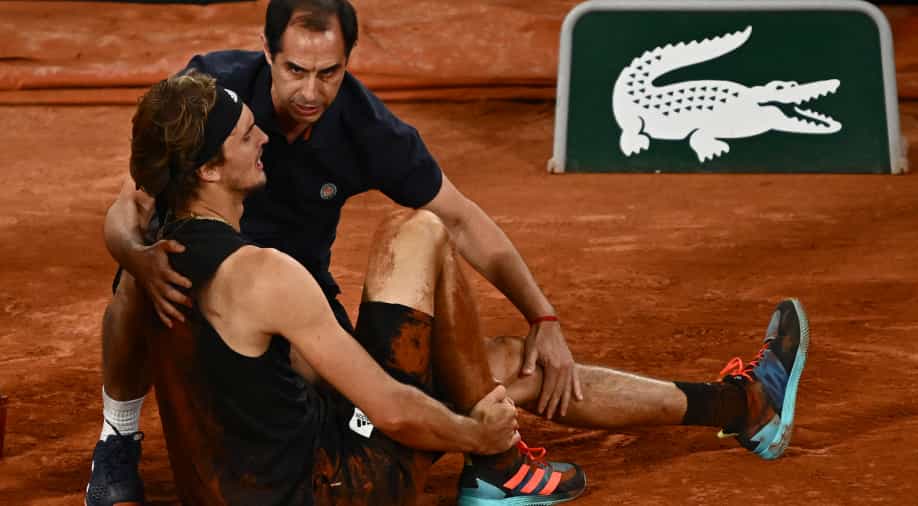 German tennis star Alexander Zverev revealed he has several torn ligaments in his right foot after twisting his foot during semi-final clash against Rafael Nadal in French Open 2022.

German tennis player Alexander Zverev, who suffered a semifinal heartbreak at Roland Garros as he was forced to pull out of the clash against Rafael Nadal midway due to injury, has revealed that he has several torn ligaments in his right foot.

Under the roof on Court Philippe Chatrier, one of the biggest matches of the season was cut short at 7-6(8), 6-6, when Zverev had to leave the court on a wheelchair after he badly rolled his right ankle, moving to his right when tracking down a Nadal forehand deep behind the baseline.

Zverev cried in pain following the fall and had to be assisted into a wheelchair by the physio and Nadal, who quickly made his way round the net to help support the 25-year-old.

Clearly in agony, the world No. 3 returned to court on crutches several minutes later to shake the hand of the umpire. He received a standing ovation from fans and a hug from Nadal, who is now one win away from capturing a record-extending 22nd Grand Slam trophy.

On Sunday, the world No.3-ranked player posted an image on Instagram of him alighting from a private plane walking on crutches, and wrote, "Hey guys! I am now on my way back home. Based on the first medical checks, it looks like I have torn several lateral ligaments in my right foot. I will be flying to Germany on Monday (June 6) to make further examinations and to determine the best and quickest way for me to recover.

"I want to thank everyone all over the world for the kind messages that I have received. Your support means a lot to me right now! And many thanks to my friends from @goodwill_private_aviation for taking such good care of me in the given circumstances."

The 25-year-old added he hoped to be back at Roland Garros next year.

"I will try to keep you updated as much as possible on further developments. See you next time @rolandgarros!"

Due to the nature of the injury, Zverev`s participation in the third major of the year -- Wimbledon -- is in doubt as the grass-court tournament begins on June 27.