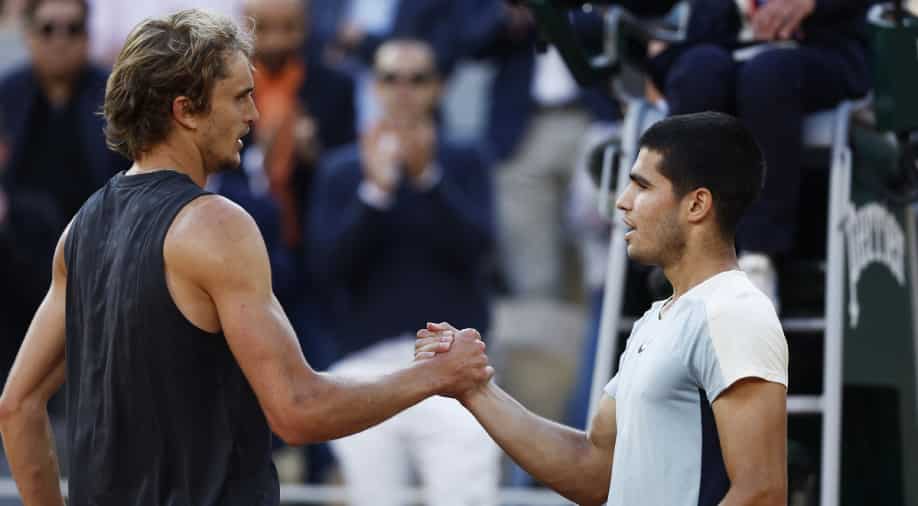 German third seed Alexander Zverev capitalised on an error-filled performance from Carlos Alcaraz to tame the high-flying teenage Spaniard 6-4 6-4 4-6 7-6(7) on Tuesday and reach a second straight semi-final at the French Open.
This was the first time the 25-year-old Zverev defeated a top-10 opponent at a Grand Slam in 12 attempts and his victory came against a player who came into the contest having won 14 consecutive matches.

Zverev, who lost to Stefanos Tsitsipas in the 2021 semi-final, had a 2-1 head-to-head lead against Alcaraz but his opponent had won their most recent meeting -- the only one on clay -- this month in the final of the ATP Masters in Madrid.

Alcaraz made 56 unforced errors as Zverev saved a set point in the fourth set tiebreak before converting his second match point to set up a meeting against either world number one Novak Djokovic or 13-time French Open champion Rafa Nadal.

"At the end of the day I knew I had to play absolutely my best tennis today from the start," a beaming Zverev said on court. "He kept coming back.

"He is going to win this tournament a lot of times not just once. I hope I can win it before he starts beating us all and I have no chance."

On a sun-bathed Court Philippe Chatrier, Zverev brought his best form to the match, serving strongly and remaining solid in the rallies against his athletic opponent who chased down almost everything that came his side of the net.
But Alcaraz seemed too eager to impose himself on the match early and it resulted in an array of unforced errors from the young Spaniard.

A couple of mistakes from Alcaraz in the fifth game opened the door for Zverev and he pounced to get the first break, which proved enough for him to bag the opening set.

Alcaraz, bubbling with energy and with most of the boisterous crowd on his side, became increasingly frustrated, throwing his hands up and muttering to himself but he could not find a way to rein in his unforced errors.

He committed 16 in each of the opening two sets and a break in the seventh game of the second gave the German the advantage which he turned into a 2-0 lead in the match.

Alcaraz`s fearless attitude bore fruit in the third set when he turned on his magic to break Zverev`s delivery in the 10th game and get a foothold in the match.

With Alcaraz`s fightback gaining momentum, Zverev stayed calm on his service games and, with a stunning backhand down the line on the run and an Alcaraz double fault, the German got his nose ahead.

Also Read: Had my chances but lost to a better player, says Novak Djokovic after going down against Rafael Nadal

The Spaniard would, however, not go down without a fight and with Zverev serving for the match, Alcaraz converted a breakpoint with a backhand winner to get the set back on serve and get the crowd back on their feet.

Zverev saved a set point and then converted his second matchpoint with a breathtaking backhand service return, letting out a huge roar after completing the victory after three hours and 18 minutes.

"For me obviously when it is shady and much slower it is not perfect for me," Zverev added. "I did not get broken once when it was sunny. The match was turning his way, I`m extremely happy I won the tiebreak."