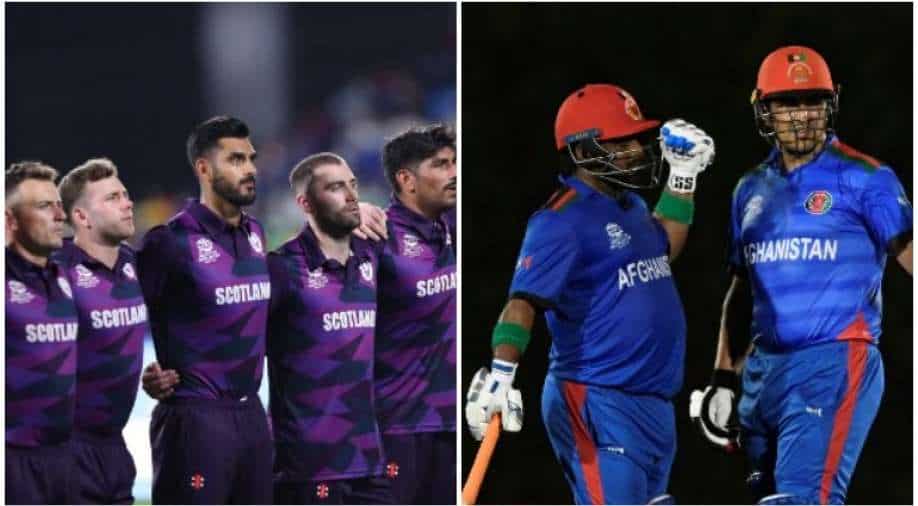 T20 World Cup 2021: Afghanistan will face Scotland in match 17 of the marquee edition, at the Sharjah Cricket Stadium, Sharjah.

Match 17 of the T20 World Cup 2021 edition, in the UAE, will see the Afghanistan cricket team face Scotland from Pool B. This will be the second game from Pool B after Virat Kohli-led India faced Pakistan on Sunday evening (October 24), at the Dubai International Cricket Stadium, Dubai.

Both sides are coming into this encounter by covering different paths. Talking about Scotland, the Kyle Coetzer-led side have been very impressive so far in the competition. Having won both their warm-up encounters, Scotland beat the likes of Bangladesh, Papua New Guinea and Oman to enter the Super 12 with a bang. On the other hand, Afghanistan have had a torrid recent past post the Taliban terror outfit's takeover. Hence, all eyes will be on their national side as some good performances will really help in lifting the troubled countrymen's spirits.

Scotland will, so far, be very proud of their performances and how they have approached all their fixtures -- by being fully-charged up and coming out with a positive intent. However, now they will like to move ahead and make world cricket take note of their progress by upsetting few top teams. The Mohammad Nabi-led Afghan side, meanwhile, will now look to take a leap forward by making a statement in the Super 12, with convincing wins over the lowly-ranked sides and targetting some marquee teams in Pool B to enter the semi-finals.

ALSO READ | T20 World Cup, AFG vs SCO live streaming: When and where to watch Afghanistan vs Scotland match?

Match prediction for Afghanistan vs Scotland tie: The two teams are likely to play on a fresh strap where anything over 170 can be a possibility. Both sides have some attacking batters in the form of Mohammad Shahzad, Hazmatullah Zazai, Coetzer, Nabi, Rashid Khan, George Munsey,  Calum MacLeod, etc. Moreover, the slower surfaces will also help the spinners; giving Afghanistan some advantage going into the contest. A close encounter awaited, however, Afghanistan to topple Scotland?