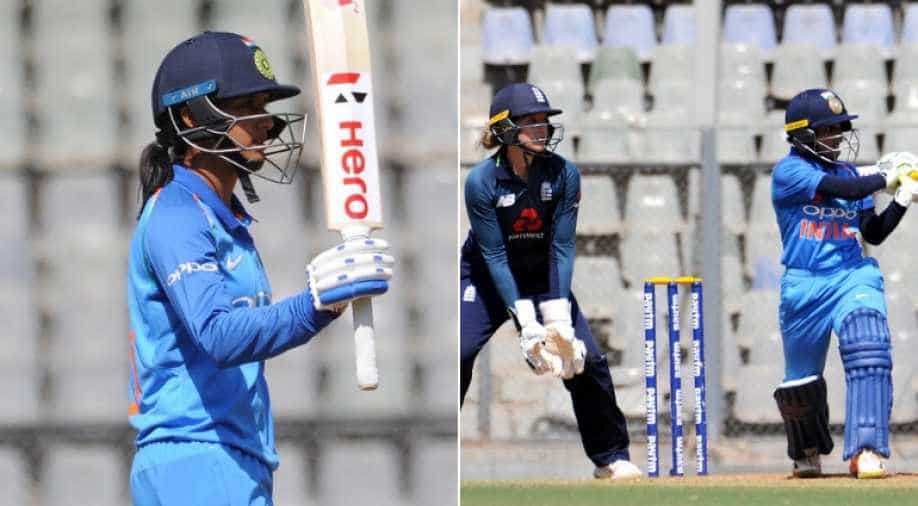 India won the first game by 66 runs and the third and final game will be played at the same venue on February 28.

Opener Smriti Mandhana's stylish 63 was complemented by skipper Mithali Raj's unbeaten 47 as Indian women cruised to a comfortable seven-wicket victory against England to take an unassailable 2-0 lead in the three-match series.

Chasing an easy target of 162, the hosts cantered to the target in 41.1 overs, primarily due to two significant partnerships.

The 73-run stand between Mandhana and Poonam Raut (32 off 65 balls) for the second wicket set the foundation and the 66 runs for the third wicket clinched the issue in favour of 'Women In Blue'.

The second win on the trot also helped the hosts grab two crucial points to go up the ladder in the ICC Women's ODI championship table.

India won the first game by 66 runs and the third and final game will be played at the same venue on February 28.

A great effort today by the team to win the series especially @shikhashauny & @mandhana_smriti who were brilliant with the ball & bat respectively. #INDvENG 🏏🏆 @BCCIWomen pic.twitter.com/3pbhIM1I35

"The first half is very important even if you choose to bat. Later on, the wicket eases out because the pitches here are well rolled. I was a bit disappointed with the 10th wicket partnership England got, but I guess, 150-odd, I knew we were always there," skipper Mithali said after the match.

After India lost Jemimah Rodrigues (0) early, Mandhana and one-down Raut steadied the ship. Mandhana hit seven fours and a six in her 74-ball knock while Raut played her usual defensive game with four boundaries to her credit.

Mandhana was in her element, hitting eloquent drives and pulls as England bowlers were taken to task.

Raut, who got a 'life' on 26 after Natalie Sciver dropped her catch on her own bowling, however could not make most of it. Soon after that, she was stumped by Sarah Taylor off Georgia Elwiss, even as, the hosts still required another 88 runs for a victory.

But then skipper Mithali played her part to perfection as she and Mandhana dashed off any hopes that England had harboured.

However, Mandhana was trapped in front of the wicket by Anya Shrubsole, with India requiring another 22 runs.

Raj, who is the leading run getter in ODIs, showed her class and stamped her authority, hitting eight fours in the process.

Deepti Sharma remained unbeaten on 6 with her captain and fittingly Mithali finished the game with a boundary.

Earlier, Pandey and Goswami snapped four wickets each as they ripped apart the England batting line-up after their skipper Heather Knight chose to bat first.

Pandey, who returned with her best figures in ODIs, surpassing her previous best of 4/34, and Jhulan kept a tight leash and were rewarded for it. The duo was well supported by spinner Poonam Yadav (2-28).

"My role was to give early breakthroughs and to stick to my plans, and I was happy to bowl in the right areas. I wanted to consistently do that and hope the batsmen make an error too," Goswami said at the post-match presentation ceremony.

"When you're bowling in a Powerplay, then you need to have a second plan. Can't just use one stock ball, so was just trying to enjoy the bowling. As long as you're playing, nerves will always be there. It will always help you to do better," she added.