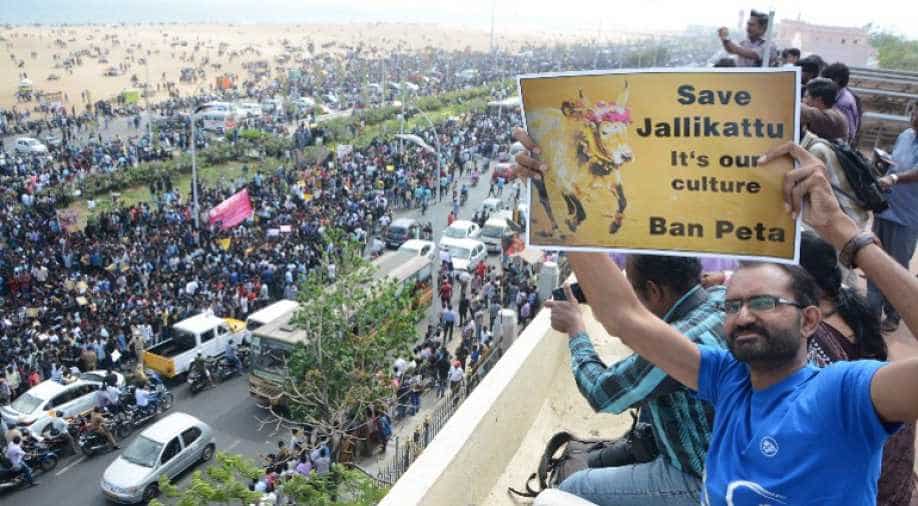 As pro-Jallikattu protests across India's southern state of Tamil Nadu continued to gain steam with a group of youngsters continuing their agitation here through the night, the state government on Wednesday held talks with agitators and assured its commitment to hold the bull taming sport in the state. The government also told the youths that it would even approach the President seeking an ordinance on the matter.

The Tamil Nadu government has been urging the Centre repeatedly to issue an ordinance to conduct Jallikattu, the bull-taming festival held during the Tamil harvest festival Pongal in mid-January. More than 200 youth were taken into custody on Monday night after they held protests at Alanganallur village demanding lifting of the ban on Jallikattu.

State fisheries minister D Jayakumar, along with his cabinet colleague K Pandiarajan held talks with representatives of the agitators early morning on Monday to defuse the agitation. The minister said 50 AIADMK Lok Sabha and Rajya Sabha MPs will "exert required pressure on the Centre" to conduct Jallikattu in the state. "Not just that, this government will also take steps to meet the President to seek an ordinance," Jayakumar said.

Responding to the protestors' demands for an assurance from chief minister O Panneerselvam for conducting Jallikattu, school education minister Pandiarajan said the government cannot give any oral assurance and indicated that the chief minister could issue a statement later in the day on the matter.

Chandramohan, one of the representatives who held talks with the ministers on behalf of the protestors, insisted that the chief minister support the bull-taming sport. "The government should understand the sentiments of the people and exert pressure on the Centre. The ministers have assured us that they will find a solution," he said.

Meanwhile, the protestors at Marina, who converged on Tuesday following an agitation at Alanganallur in Madurai, were unrelenting in their demand to conduct Jallikattu and sat through the night. The agitators claimed that more volunteers had either joined them or were on their way to join the protests. Some reports said over 3,000 people, mostly students had joined the protests demanding permission to host the bull-taming festival in Tamil Nadu.