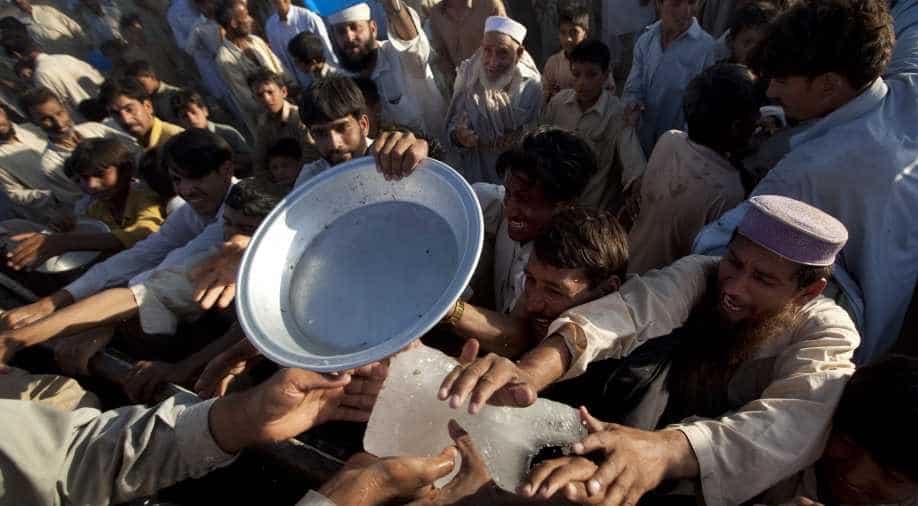 Shah Nawaz walks Karachi's dusty streets, one of thousands in the financial hub who are being fed by charities as Pakistan's economy picks up pace -- but, some say, not fast enough for its poverty-stricken millions.

Confidence in Pakistan is growing, with the International Monetary Fund claiming in October that the country has emerged from crisis and stabilised its economy after completing a bailout programme.

Its credit rating has improved, while there are encouraging signs of foreign investment, such as a massive Chinese infrastructure project officials routinely call a "gamechanger".

But all this glittering promise has yet to feed millions like Nawaz.

The 14-year-old stands waiting with more than 100 others outside the Saylani Welfare building to receive free meals twice a day for his family.

He dropped out of school four years ago, when Pakistan's GDP still hovered around a weak three percent, as his family struggled to survive on his father's meagre part-time wage of 250 rupees ($2.30) a day.

"I have immense passion for my studies and want to become a prosperous man, but I can't," he tells AFP.

His despair resonates throughout Pakistan, where a new central bank report says 60.6 per cent of the population do not have access to cooking fuel, half of all children are deprived of a basic education, and a third of Pakistanis have no access to a primary medical facility.

"The number of people coming to our centres is growing, and they are not beggars but poor people who are not able to make ends meet," Aamir Saylani, one of the charity's officials, told AFP.

Prime Minister Nawaz Sharif vowed to boost the long-depressed economy after winning a third term in 2013.

The key challenge Sharif faced was a chronic energy crisis, as power outages shut down factories and bring businesses to a virtual standstill daily.

He approved more than a dozen coal, hydro, gas and combined cycle power generation plants, most due to begin generating electricity by mid-2017.

Meanwhile his advisers negotiated a three-year extended fund facility with the IMF to raise $6.4 billion. That, coupled with remittances from Pakistanis overseas, have taken foreign exchange reserves to an estimated $22 billion, from $3 billion in 2008.

But independent economists doubt the growth is sustainable.

"You were on artificial support, and it will be a real litmus test for the government once the IMF facility is over," said Abid Suleri, who heads the Sustainable Development Policy Institute in Islamabad.

It would take sustained growth of around six percent for five successive years to make a real dent in poverty, said Mohammad Sabir, a senior economist at the Social Policy and Development Centre (SPDC) in Karachi.

Hopes are pinned on the China-Pakistan Economic Corridor (CPEC), a $46 billion initiative by Beijing that aims to link the Asian superpower's Xinjiang region with the Arabian Sea through Pakistan.

The plan encompasses a series of infrastructure, power and transport upgrades that Islamabad hopes will kickstart the economy.

But experts say the deal is opaque, and much more transparency is needed before they can assess any impact for Pakistan -- including, for example, whether the $46 billion is an investment or a loan.

"If it is a loan, it would severely hamper the future foreign payment capability of the country," warned Sabir. Foreign debt remains around $73 billion, just over a quarter of GDP, the central bank says.

Werner Liepach, Pakistan country director for the Asian Development Bank, told AFP it was "much too early to tell" what effect CPEC would have.

However given the challenging global context, "contrary to what many believe, Pakistan is actually doing quite well", he said.

"The benefits of growth in Pakistan are actually more widespread... as compared to many other developing countries that may show higher levels of growth, but with greater inequality."

Nevertheless there is room to improve, he added.

Meanwhile, Pakistanis like Shah Nawaz still struggle. Days after speaking to AFP, the building housing the charity providing food for his family was flattened in an operation targeting illegal settlements on government land.