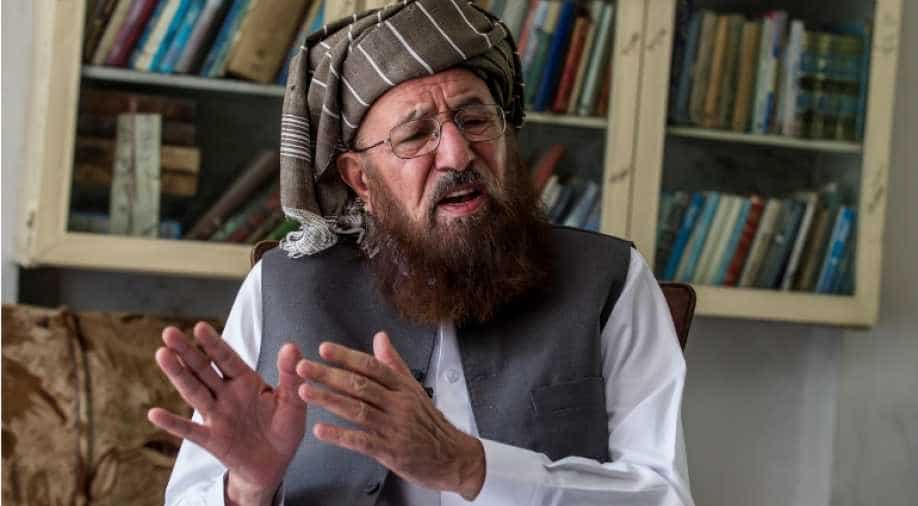 Maulana Sami Ul-Haq, dubbed the 'Father of the Taliban', was stabbed to death by unknown intruders at his residence Friday night.

A key Pakistani cleric with close ties to the Afghan Taliban who was killed in the garrison city of Rawalpindi was buried Saturday as Prime Minister Imran Khan called for an investigation into the murder.

Maulana Sami Ul-Haq, dubbed the "Father of the Taliban", was stabbed to death by unknown intruders at his residence Friday night.

The cleric, who is in his 80s  was buried in his hometown Akoda Khattak, around 115 kilometres (70 miles) northwest of Islamabad.

Thousands of people gathered for the funeral prayers guarded by dozens of police personnel while a bomb disposal squad cleared the graveyard before the cleric's body was brought for burial, an AFP reporter at the site said.

His seminary had produced some of the key leaders of the Afghan and Pakistani Taliban, something that the cleric and his associates would proudly tell visiting journalists.

The list of graduates written on the walls of the seminary includes the names of leaders of the Pakistani Taliban.

An investigation into the murder of former prime minister Benazir Bhutto in 2007 revealed that the assassins had stayed at his seminary before travelling to Rawalpindi where Bhutto was killed.

The Afghan Taliban issued a statement terming his death "a great loss for the entire Islamic Ummah" (nation).

"He rendered unforgettable services and assistance to the oppressed Afghan nation against the Soviet and American invasions," the statement said.

Afghan envoys in Pakistan had reached out to him seeking his help in starting negotiations with the Afghan Taliban.

But analysts doubted if he had any sway with them.

"He did not had any influence on the Afghan Taliban but he supported their cause," analyst Rahimullah Yusufzai told AFP.

"Many of the leaders and fighters of the Afghan Taliban had studied at his madrassa," he said.

Pakistani media termed his death a blow to the Afghan peace process but Yusufzai doubted it, saying his death would have no impact on the talks as he was never part of any negotiations.

Social media users in Afghanistan termed him a "troublemaker".

"The Taliban have lost their father, now they are orphan," Bilal Noori, an Afghan, posted on Facebook.

His death was widely condemned in Pakistan by politicians and religious leaders, with the prime minister calling for an investigation into the murder.

In 2014, the cleric was a member of the negotiating committee from the homegrown Tehreek-e-Taliban Pakistan (TTP) -- who brokered a ceasefire with the government, although the talks later failed.

He twice held roles as a member of Pakistan's Senate.

His JUI-S party was an ally of the ruling Pakistan Tehreek-e-Insaf (PTI) party headed by Prime Minister Khan.