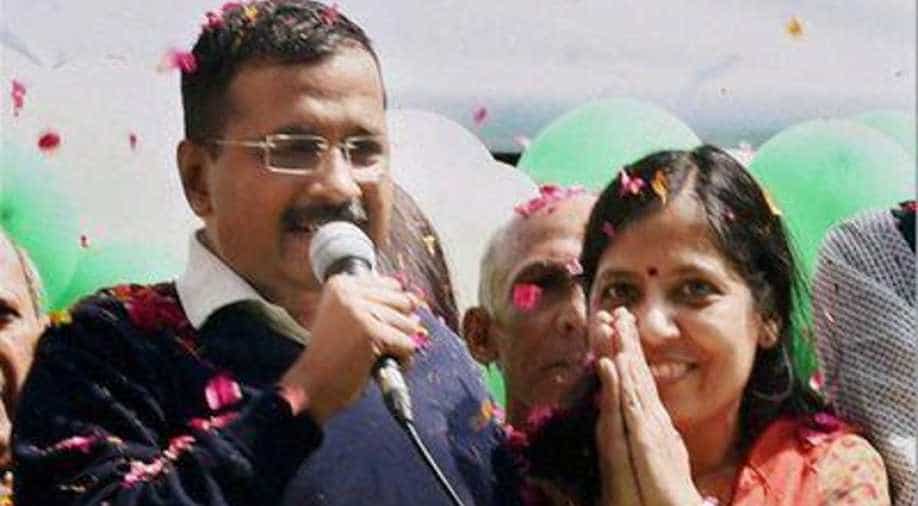 Kapil Mishra was suspended from the party on May 8, a day after he accused Kejriwal of taking a bribe of Rs 2 crores ||The sacked legislator, who was on an indefinite hunger strike since May 10, broke his fast today

Delhi chief minister Arvind Kejriwal's wife Sunita and sacked water minister Kapil Mishra on Monday got into a war of words on Twitter over the corruption charges levelled by the suspended Aam Aadmi Party (AAP) legislator against the AAP chief.

.@KapilMishraAAP @KapilMishraAAP if Modi ji's threat or any other undue pressure is making you to do all this, talk to us, we all will fight, don't backstab.

.@KapilMishraAAP If its your greed, which made you to backstab your elder brother, then we all will fight you. Your lies won't sustain very long.

In response to Kapil Mishra's tweet mocking her, Sunita Kejriwal, a serving Indian Revenue Service officer with the Indian government, asked Kapil Mishra not to "cross his limits".

Now you are crossing your limits. Don't drag our personal life in all this. https://t.co/bducTU5chq

Sunita Kejriwal's remarks came a day after Kapil Mishra accused the Delhi chief minister of laundering money and the AAP of lying to the election commission about the source of their funding.

On Sunday, he accused the AAP of concealing around Rs 36 crore from the party workers and the Election Commission. He said the party acquired the money through shell companies, fainting soon after his remarks.

Kapil Mishra was suspended from the party on May 8, a day after he accused Kejriwal of taking a bribe of Rs 2 crores from health minister Satyendra Jain. The bribery allegations came after he was sacked as water minister for poor performance.

Kapil Mishra had been on an indefinite hunger strike since May 10, at his official residence in the capital demanding that the Delhi Chief Minister reveal the source of funding of the foreign trips of five AAP leaders -- Sanjay Singh, Ashish Khetan, Raghav Chadhha, Satyendra Jain and Durgesh Pathak -- in the last two years.

He broke his fast today and was discharged from the hospital where he was admitted after he had fainted at a press conference here yesterday.

Soon after being discharged, Mishra said he would go to the offices of the CBI and the Central Board of Direct Taxes to lodge complaints against Chief Minister Arvind Kejriwal whom he had accused of corruption. He alleged he was forced by doctors to break his fast.

The former Delhi minister termed his fast as "satyagraha" against Kejriwal.

Taking a dig at Mishra, Delhi Deputy Chief Minister Manish Sisodia said, "There cannot be a 'satyagraha' on the basis of lies."

The AAP has dismissed Kapil Mishra's charges, calling him an agent of the BJP.

Girls in Afghanistan to return to school 'soon as possible', says Taliban